Home » Pregnant Shooter From Malaysia To Compete At The London Olympics 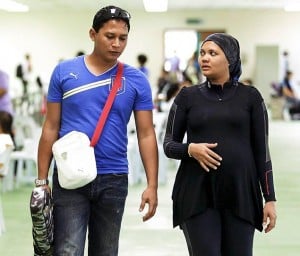 One competitor in the London Games is showing women that it’s never too late to follow your dreams. Nur Suryani Mohamed Taibi is planning to attend the 2012 London Olympics, despite the fact that she will be eight months pregnant when she steps up to the line to represent her country.

“When I found out that I was pregnant before competing in the Asian meet, I thought that that was the end of my Olympic dream as I will have to turn my attention to my baby,” Nur Suryani said. “But when I eventually qualified for the 10-meter air rifle event on merit, it made me rethink that perhaps I am supposed to go all the way, despite my pregnancy.”

Shooting does require less strain on the body than some of the other summer sports, but Nur Suryani says that she still has to train at all times of the day so that she can predict how she will feel during the competition. She also said that she has had to alter her stance for shooting.

She will be the first ever female Malaysian rifle shooter in Olympic history. She will also be the only pregnant competitor this year. However, Nur Suryani is not the first pregnant athlete to compete in the Olympics.

The first ever pregnant athlete to compete in the Olympics was Magda Julin of Sweden. She was four months pregnant when she went on to take the gold medal in figure skating during the 1920 Summer Olympics in Antwerp, Belgium. And Diana Sartor of Germany competed in the 2006 Winter Olympics during her first trimester as the fourth member in the skeleton race. In the 2010 Winter Olympics in Vancouver, Kristie Moore served as an alternate to the Canadian curling team and ended up being called up during a match against Sweden.

Currently, Nur Suryani is ranked 47th in the world for the air rifle competition. She took the gold at the Commonwealth Games in New Delhi in 2010 and place third in the 2010 Asian Games held in Guangzhou, China. So how does she feel about the upcoming competition?

“The Olympic Games are important to me…Every athlete dreams of competing at the Olympics,” she said. “Yes, there will be pressure on me to perform, but I will just focus on my preparation and nothing else.”