With her very pregnant belly, Kristen Thompson probably looked like a pretty easy target to the mugger that tried to steal her purse. 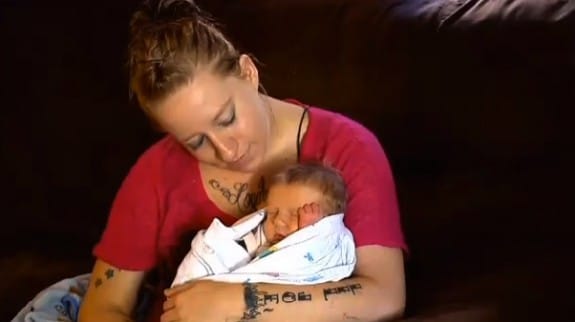 But he quickly discovered that looks can be deceiving.

After finishing her grocery shopping at a Michigan Kroger’s on September 11th, Kristen started loading her groceries into her truck. Right then, as if carefully calculated, the mugger swopped in.

“I only had three bags so I went to put them in [my truck] and this guy came out of nowhere and snatched my purse,” Kristen told PEOPLE. “I ran after him. It was just an instant reaction. I was mad. Everything is in there that I need.”

And chase him, she did. She followed him all the way to the side of the store where he pushed her down, so hard, she said, that her knees were scraped up and bloody.

But that didn’t stop her.

“I got back up and ran after him,” she said.

When they’d reached the back of the store, her legs had started bleeding so badly that she had to sit down on the curb. There, she spotted some kids she knew playing basketball across the street. She yelled at them for help.

“Hey! Grab by purse!” she yelled at the boys, pointing to the mugger that was still trying to escape.

The boys took off after the man.

“He tried to fight with them for a minute and dropped my purse,” she said. “He had my wallet and went to go take off running and they tackled him. After they got my stuff back, he took off.”

By that time, Kristen had already called the police, her parents, and her brother, who showed up at the scene soon after. Her brother went after the mugger and “caught him a couple of streets away,” she said. That’s how the man – identified by police as Mark Newton, 30 – ended up with a banged up face. 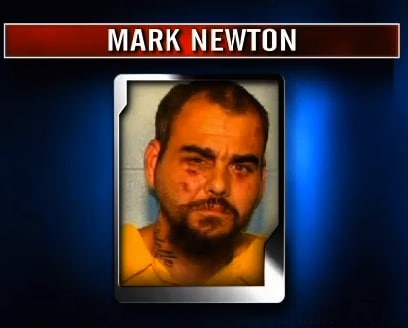 “He was fighting with my brother and my brother punched him and knocked him on his butt,” she said.

But that wasn’t the end of the horrific nightmare; Kristen still had to identify the man as her mugger.

“I asked him, ‘Out of everybody in that parking lot, why me? A pregnant woman?’” she said. “He didn’t say anything at all.”

After giving her statement to the police, Kristen’s family took her to the hospital.

“They monitored me for an hour,” Kristen, who was already scheduled to have a cesarean section the next day. “They came in at 5:20 said they were doing the C-section at 6pm.”

By 6:28 pm, Joseph Thompson was born, weighing in at 7lbs, 7oz and 21 inches long. And thankfully, despite his mother’s scuffle in the parking lot, the little boy came out perfectly healthy. 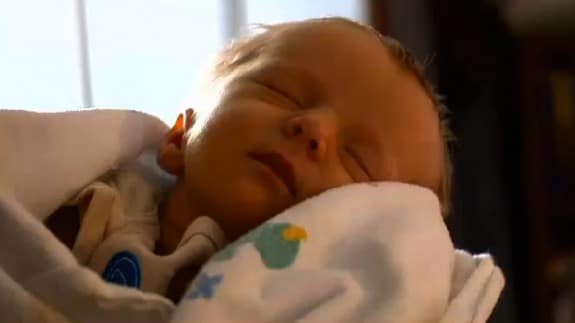 “He’s healthy,” Kristen said. “He’s really good. He sleeps a lot like most babies do.”

Her story has made the local news and she’s being touted as a bit of a local hero back at home.

Jason Loenz, a spokesman for the Flint Police Department, confirmed Kristen’s recount of the day’s events.

“We’re glad the situation was handled with no injuries to the mom and her child,” he told PEOPLE, “and that the suspect was caught and will face his day in court.”

Charged with unarmed robbery, Newton is being held with an $8,000 bail and faces a preliminary hearing on Wednesday. His attorney, Paul Watson, declined to comment.

Even though the situation could have played out very differently for Kristen and her son, she says she doesn’t have any regrets about chasing the thief.

“I’m glad I did it,” she said. “I work too hard for what I have and people like him are not going to take it from me.”