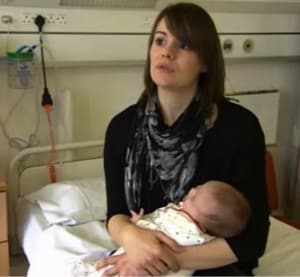 At five months pregnant, 29-year-old Donna Kelly was told that her baby was just an inch away from the top of her cervix. According to doctors, the baby was at a high risk of “falling out.” And after two disheartening miscarriages at 19 and 23 weeks, Donna was ready to try anything – even if it meant lying upside down for three months.

Donna suffered from what is known as a weak cervix. So upon the recommendation of Professor Siobhan Quenby, one of the world’s leading experts in recurrent miscarriages, the mom-to-be spent the next three months in a hospital bed, lying upside down at a 45 degree angle to reduce the pressure on her cervix. She and her husband, Mark, crossed each day spent in bed off on a calendar to help pass the time.

“The way I saw it, one day more in bed hopefully meant one day less in special care for the baby if she arrived too prematurely,” Donna said. “It made me feel sick at first, and I had a massive ‘head rush.’ But after a couple of days, my body adjusted and I got used to it. I propped myself up with pillows and the barrier round the bed kept me from falling out. I had to roll on my side to eat but I’d always have a dead arm by the end of the meal.”

While the advice may seem crazy and extremely uncomfortable, it seems to have worked. Six weeks before her due date, baby Amelia was born by caesarean. Other than needing to spend two weeks in an incubator, baby Amelia is alive and healthy, and her parents couldn’t be happier.

“I’m thrilled to have Amelia,” Donna said. “But there will always be a place in my heart for the babies I never knew.”

Known as the Trendelenburg position, doctors also use this method ‘when a woman’s cervix is too swollen and won’t quite dilate to 10 centimeters, or during the incidence of a prolapsed umbilical cord to take pressure off the cord and get more oxygen to the fetus, or it can be used to help rotate a posterior fetus either during pregnancy or the birth itself.’