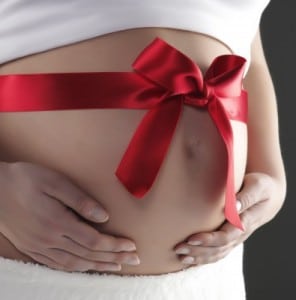 Rebecca Byrne, was 13 weeks pregnant when she was asked to choose between her baby and herself. She had been diagnosed with breast cancer and while the mother was battled for her life, she decided to continue with her pregnancy, overcoming the odds to save both herself and her baby.

35-year-old Rebecca from Framingham was 1 in 3,000 pregnant women each year who are diagnosed with breast cancer.

“I was afraid,” she said. “(The doctor) said basically I had to choose between my breast and my baby.”

She was just 10 weeks pregnant when she noticed a lump in her breast. As she and her husband had been trying for a baby for four years, with several fertility treatments, the pregnancy was special. They had not even shared the news with friends or family.

With the choice given between termination of pregnancy or a mastectomy by the first oncologist, Rebecca decided to take a second opinion from Dr. Ann Partridge, the director of the program for young women with breast cancer at Dana-Farber Cancer Institute. The visit proved to be a turning point in her life.

The doctor assured her that she could be cured from her Stage 3 breast cancer without harming her baby or her breasts.

“The old thought was that women did better if you got rid of the baby,” Partridge said. “That’s not true anymore.”

She also added that as by the first trimester the baby’s vital organs have already developed, pregnant women can take chemotherapy although there are risk of birthing complications or birth defects.

Dr. Partridge treated Rebecca with four rounds of chemotherapy over 12 weeks during her second and third trimesters. She had two lumpectomies lost her hair, suffered from exhaustion and nausea.

But good news arrived on July 30 when Rebecca delivered a healthy baby girl Emelia at 33 weeks weighing 3 pounds and 9 ounces.

Rebecca then continued with her treatment, doing the rounds of radiation and chemotherapy with a medicine which was not safe for the baby during her pregnancy. She also later had a mastectomy.

Dr. Partridge had many words of praise for her brave patient.

“She was incredible in the face of a very, very difficult situation physically and emotionally. She’s strong and she came in for every treatment with a happy face on.”

Says Rebecca holding her 9-month old baby in her arms, “This is what I wanted. It almost makes the cancer go away. She distracts me with so much happiness and joy that I forget sometimes that I still have chemotherapy and I still have to get tested for years.”

Rebecca is still undergoing chemotherapy and will have to visit the doctor for special tests every five months. But right now her focus is being a mother.