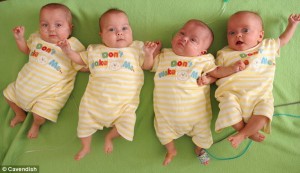 Much to their parents delight, a set of quadruplets, who were born in January, have been re-united at home after a lengthy hospital stay.

Gillian Holden a thirty five year old mother of one (Abbie) defied odds of 750,000-1 and naturally
conceived the set of rare quadruplets. Doctors at the St Mary’s Children’s Hospital in Manchester, we’re forced to perform an emergency c-section just 28 weeks into the pregnancy when Gillian’s kidneys and liver started to fail and she was diagnosed with pre-eclampsia. Identical triplets, Bethany, Millie and Ellie arrived first weighing a mere 1lb and 15oz., 2lb and 2oz., and 1lb and 7oz. respectively. Their sister Lucy, who was separated from her sisters inutero by just a thin membrane, was born last and weighed 1lb and 14oz. 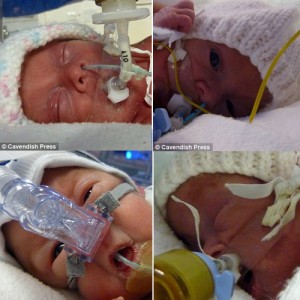 Due to medical complications the babies were immediately separated at birth and placed in incubators. Lucy the last born was the first sister discharged from the hospital in May. Her two sisters Bethany and Millie, who struggle with a disease common in premature babies called chronic lung disease, were released home in June, requiring oxygen. Ellie, who was also diagnosed with chronic lung disease, was the last to be reunited with her sisters in July, after receiving further treatment to help cure her sleep apnea.

Abbie, 9 is ecstatic that her sisters are finally home. She is already talking about being a big sister and unconditionally loving them even if they borrow her clothes without asking and use her makeup.


Parents Gillian and Marc are relieved that their family is finally together after six long months of being separated and that the new additions are happy and healthy. – Jeff Staff Writer