Mom Raina had a sudden onset of severe pre-eclampsia (development of high blood pressure in pregnancy which can be fatal). Xavier was also IUGR (intrauterine growth restriction). 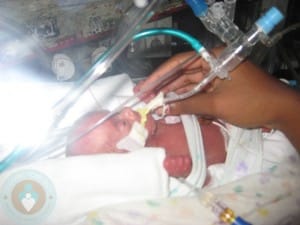 Once he was extubated, he was on CPAP (continuous positive airway pressure) for a few days and then put on low flow oxygen via nasal cannula and was on a very low amount of oxygen up until about a week before he left the NICU.

Once Xavier was moved from an isolette to an open crib his biggest issue was feeding.


Some days he would eat great, other days, he’d have to be tube fed.

In the end, learning to feed is what seemed to extend his stay.

In hindsight I believe when he wasn’t eating, it was because he had reflux that was undiagnosed.

Several weeks after discharge Xavier’s pediatrician made a referral to a gastrointerologist because he was refusing food and having issues with projectile vomiting. The GI diagnosed him with reflux and he was put on prevacid and within a week or so was eating again with no issues. 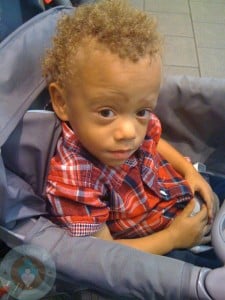 As for lasting effects from his prematurity, Xavier still has feeding issues. They are not too severe but sometimes he refuses food altogether and other times seems to have issues with texture.

Xavier is still a very small child due to the prematurity and IUGR. He is 23 lbs at 24 months of age.

He is growing along his own curve, just at a very slow pace. His pediatrician isn’t concerned.

Xavier seems to be hitting his developmental milestones just fine. His Early Intervention was discontinued about three months ago due to him meeting the goals.

Xavier may have a slight speech delay but we are waiting until he is at least 24 months adjusted age before considering consulting with a speech-language pathologist.

Right now Xavier is an only child. However mom is currently pregnant with a new little one!

I asked Raina to give one piece of advice for a new preemie parent and she said:

Be as involved as possible in your child’s care while in the NICU.

I asked her to describe Xavier in one word and she said: PRECIOUS