Home » Pretend Play May Not be as Important as Previously Thought, Researchers Say 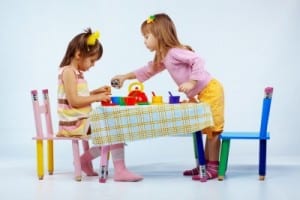 For the last 40 years, psychologists, teachers and parents have believed that pretend play is a normal and important part of child development. Is this belief based on sound evidence? University of Virginia researchers don’t think so.

After analyzing more than 150 previous studies, lead author Angeline Lillard, U.Va, professor of psychology in the College of Arts & Sciences, and her colleagues found no evidence linking a positive pretend play relationship to normal mental health development in children. Lillard says the “evidence” is based on “flawed methodology,” and that it may have been written by someone with children who played pretend. This may have given the author a biased opinion on what is normal and abnormal where pretend play is concerned.

“We found no good evidence that pretend play contributes to creativity, intelligence or problems-solving,” Lillard said. “However, we did find evidence that it just might be a factor contributing to language, storytelling, social development and self-regulation.”

Lillan added that it’s very difficult to determine whether pretend play is really a result of creative and imaginative behavior in children, if it has been pushed by parents with good intentions, or if it really does aid in development.

“When you look at the research that has been done to test that, it comes up really short,” Lillard said. “It may be that we’ve been testing the wrong things; and it may well be that when a future experiment is really well done we may find something that pretend play does for development, but at this point these claims are all overheated. This is our conclusion from having really carefully read the studies.”

Parents and professionals should know, however, that some form of imaginative play – playing house, doctor, making stuffed animals talk – should exist during early childhood, at least by age 2. If no pretend play at all is present, parents should have the child professionally tested for autism.

So is playing pretend with your children still important? Lillard says that if you enjoy it, it can be a good thing for you and your child.

“If adults enjoy doing it with children, it provides a happy context for positive adult-child interaction, a very important contributor to children’s healthy development,” Lillard said.

And as far as school is concerned, Lillard says that playtime is important during school hours, but forced pretend play may not be beneficial.

“Playtime in school is important,” she said. “We found evidence that – when a school day consists mostly of sitting at desks listening to teachers – recess stores attention and that physical exercise improves learning.”