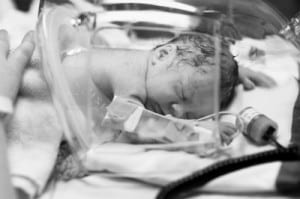 For more than a decade, the United States has remained the industrialized country with the highest premature birth rate. That’s not going to be changing, but, according to a recent report from the March of Dimes, the U.S. is making some improvements.

Infants born prematurely are at a higher risk for many complications, including death, breathing problems, developmental delays, cerebral palsy, vision loss, and so much more. What’s more, the cost of caring for a premature baby is much higher than the care of a full term infant.

“A premature birth costs businesses about 12 times as much as an uncomplicated healthy birth,” March of Dimes President Jennifer L. Howse told Medical News Today. “As a result, premature birth is a major drive or health insurance costs, not only for employers.”

Even just a few extra days in the womb can improve birth outcomes. In fact, babies born at 37 or 38 weeks – which until just last week was considered a term pregnancy – have a higher risk of health problems than those born at 39 weeks. For this reason, it is important for babies to stay in utero as close to their due date as possible.

The March of Dimes has been campaigning for just that since 2003, and since that time, the U.S. has had the highest preterm birth rate among all developed countries in the world. For this reason, March of Dimes set a national goal for the U.S. – that premature births account for no more than 9.6% of all births annually. Unfortunately, the U.S. has never met that goal, and in 2006, it hit an all-time high of 12.8%.

Thankfully, since that time, the premature birth rate has been on the decline, and is now down to about 11.5%. According to the March of Dimes, that means that about 176,000 fewer babies have been born prematurely in the U.S. since 2006, which comes to a potential savings of about $9 billion on health and societal costs. But we still have a long way to go.

“Although we have made great progress in reducing our nation’s preterm birth rate from historic highs, the U.S. still has the highest rate of preterm birth of any industrialized country,” Dr. Howse said. “We must continue to invest in preterm birth prevention because every baby deserves a healthy start in life.”

States that have been singled out as best preterm rates included California, Alaska, Maine, New Hampshire, Oregon and Vermont – all of which achieved an “A” grade from the March of Dimes (a preterm birth rate less than or equal to 9.6%). California’s rate was considered exceptional, especially since they have the highest birth rate of all the states (about 500,000 per year) and a racially diverse population.

As far as the rest of the states go: