Poor Prince William, these royal just cannot get a break.

He was on hand for the opening of the new neo-natal unit at St Mary’s Hospital, London in September.

While there, he cuddled three-week-old Sina Nuru who weighed just 4lbs at the time. 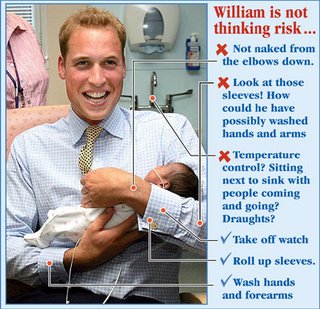 Now the picture of him that was broadcast across the world as being “sweet” has been turned into a health warning poster – describing how NOT to hold newborn babies.

Midwives at a maternity hospital have highlighted several mistakes made by the Prince.

These errors, they say, could encourage the spread of bacteria such as MRSA.

For a start, he has not rolled up his sleeves – which means the infant could be exposed to bacteria on his shirt. And because his sleeves are down, he cannot have washed his hands and arms properly.

There are also problems with where he is sitting – next to a sink where people are coming and going, leaving the child at risk of further contamination.

The poster is displayed prominently at the Simpson Memorial Maternity Pavilion in Edinburgh to remind staff of the do’s and don’ts of handling newborn or premature babies in hospitals.

Its heading, in bold red type, reads: “William is not thinking risk.”

“Not naked from the elbows down. Look at those sleeves!!! How could he possibly have washed hands and arms. Temperature control? Sitting next to sink with people coming and going. Draughts?”

William was invited to hold tiny Sina during a September visit to the hospital where he and his brother Harry were born. At first he was apprehensive because she was barely bigger than his hand, but staff reassured him and he appeared completely at ease with the youngster in his arms.

Last night Sina’s mother Banata said she had no concerns at all about the way Prince William handled her baby.

She said: “I remember he washed his hands before he held her. He was very generous and good fun. I didn’t think anything was wrong at the time.”

Miss Banata, 30, who is originally from Eritrea in Africa, said her Sina and her brother Sem were both thriving at home in London.

A spokeswoman for St Mary’s Hospital said stringent guidelines were followed when Prince William visited to open a new neo-natal unit at the hospital.

She said: “He took off his watch and he used hand gel moving around the ward and he rolled up his sleeves when he was doing this. The chair was positioned where it was because it was a small area and it was the best available space at the time.”

The spokeswoman added: “We followed the most thorough infection control protocols.”

I think that this midwives association is trying to get a bit of press for their organization. William was just being a good sport by holding the baby in the first place. There is no need to turn something positive into a negative.