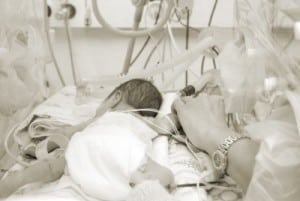 A study out of Brazil may have found a way to prevent the GI disease necrotizing enterocolitis(NEC) in premature babies. The use of probiotics seems to be a key in helping these preemies avoid the potentially fatal condition.

The results were enough to cause the researchers to halt the study early. Necrotizing enterocolitis is a well-known risk that preemies face, and is thought to be caused by an incomplete development of the intestine. Finding a way to safely prevent the condition from happening is something that researchers have been looking at for years.

The two groups had similar rates of treatments for health issues, including surfactants, theophylline, dexamethasone, and oxygen. Both groups also had similar rates for start of feeds, feeding increment, or weight recovery. Other issues in the preemies health had the same rates among the two groups.

Despite the study, the researchers are not yet ready to make probiotics a health standard for premature babies.

“At this juncture, much more needs to be learned about probiotics before considering routine use in either pregnant women or preterm infants,” they wrote

If the results of this study are correct, it may mean one more way for doctors to help premature babies overcome one of the health risks that is dangerously too common and sometimes fatal. – Summer, staff writer