Home » Potty Training Help: Once Upon A Potty 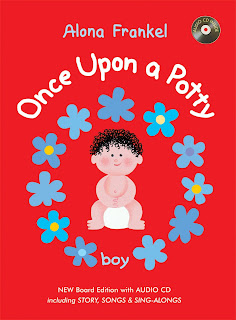 We are currently working on potty training our 3 year old and welcoming every bit of help we can get.

While I know that my son is grasping the basic concept of peeing on the potty – he is missing the bigger picture, which is the rest of the package – #2…

In 1975 Alona Frankel wrote and illustrated her first book, especially for her son Michael, on how to use the potty. This book, which is now a classic, hits all of the potty training issues spot on. Even though it was created over 30 years ago, the principles are still the same – with patience you will get pee and poo poo.

The book has now been re-released with a CD that has a Joshua and Prudence(main characters) song and a narrated version of the book. At first listen, I thought the song was a bit hokey, but after the third or fourth it stuck in my head like a song from the 80’s.

While Alona originally created the book for her son Michael, she also wrote a ‘girl’ version with the main character Prudence.

My son likes both versions and he continually asks for each book by their characters first names. If we have friends visiting, they immediately think that he is referring to friends he made at school, until I explain that he is asking for his potty training books…

Parent looking for a good, classic book that just tells it like it is will like Alona Frankel’s classic Once Upon A Potty.

This book was provided by The Parent Bloggers Network for Review.