For Michael and Robin Hamby, the welcoming of their twin boys—Asa and Eli—is a joy like no other. But it is also a time in which they recognize the need to shift their focus, to place all their attention on recuperating and giving their boys the best chance at survival. 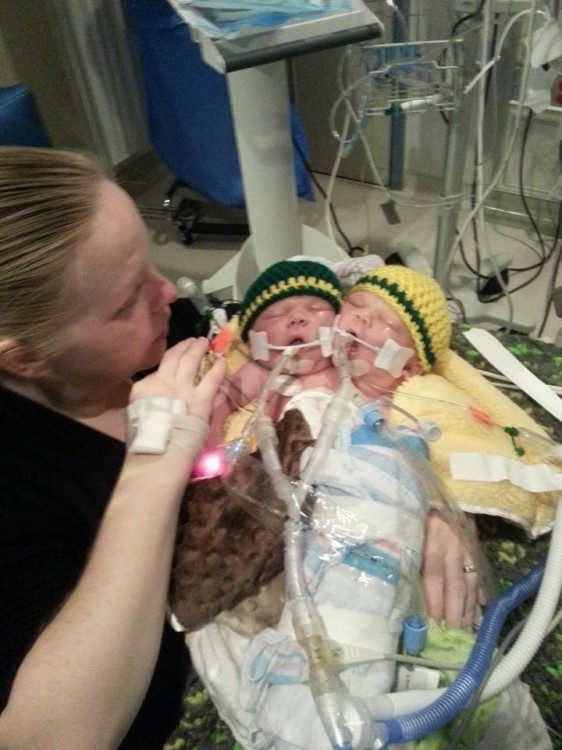 Unfortunately, these are not the only odds that these two boys have to deal with.

Born weighing 9lbs 10.4 oz, the boys are joined at the torso, arms, and legs and they cannot be separated because they share a heart and a circulatory system. Their likelihood of survival is grim; of all conjoined twins, about 40 to 60 percent are stillborn. Only about 35 percent live a day. And for those that share a heart, the mortality rate is exceptionally high.

But the family is holding onto hope, and the boys seem to be doing okay, despite the odds they’re facing.

“Robin’s doing good; she was up and moving around last night,” Michael Hamby said in a Facebook video update Friday morning, the day after the birth of their boys at Northside Hospital in Atlanta. “The boys are doing okay; they’re sleepy. They do have them on some assisted air, they do have them incubated, but they’ve got good color.”

Although Robin and Michael have kept family and friends (and those that have heard about the family’s story over the course of the pregnancy) updated on their Facebook page, they have thanked their supporters, but are now requesting a bit of privacy so that they can focus on spending time with their boys.

“Everything is just moving along as fast as it can move along. Given . . . what’s going on with their little bodies, anything still can happen,” Michael said. “We just need a little break from the world so we can put our world into our boys. Y’all just pray for us.”

And we ask that you all join us as we all do just that.