It’s a little crowded these days in the small home Amber Ertley and Levi Nelson share with their daughters, 5-year-old Lilly, 2-year-old Josey, and the newest additions: identical triplet daughters born via c-section on February 20th. 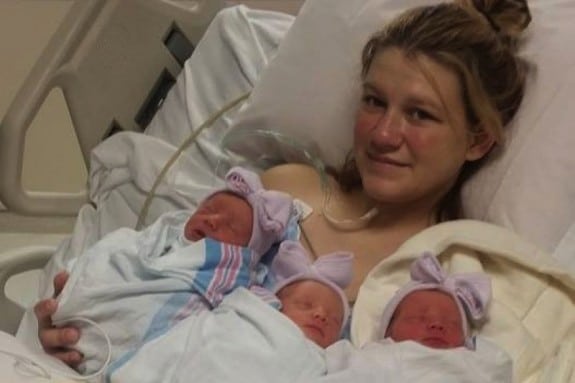 The triplets – Norah, Rylan, and Remi – shared the same amniotic sac and placenta, which means they are identical. This is extremely rare, with the babies formed when a single egg splits two times. It’s pure luck. There is no way to increase the odds of this happening since neither genetics or fertility treatment can increase the chances of identical triplets, something that only happens once in 20 million births.

The 24-year-old mom had a healthy pregnancy until near the end, when she began showing signs of preeclampsia. Admitted to the hospital early, when labor started doctors took her to the operating room for the planned c-section delivery.

With Levi at her side, the three infants were safely delivered. Nelson looked at his wife and saw that she was struggling, apparently having a seizure. Ertley lost a lot of blood during delivery and doctors at UAB Women and Infants Center had to call a “Code Blue,” rushing more medical help into the room. Amber’s heart stopped once during the ordeal, but six hours later she was resting, sedated and hooked up to a breathing tube.

Two days later, she suffered more blood loss and it happened again just 4 days after she was discharged, forcing a return to the hospital for additional treatment. She was discharged again on March 7. This young mom still has a wound vac to help her heal from the surgery. But while the recovery was anything but quick and smooth, her babies thrived.

All three infants weighed more than four pounds at birth and didn’t need any supplemental oxygen or IV fluids. 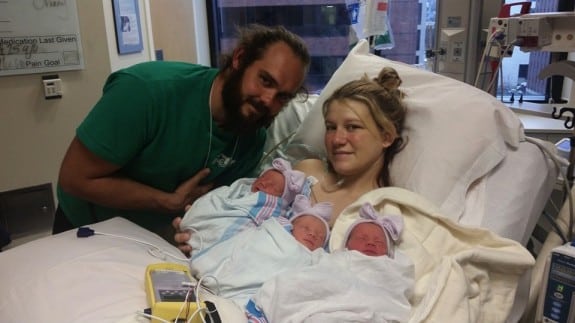 Now that everyone is home together, both Amber and Levi are grateful for the extra help. The couple’s small house is within sight of his parent’s home, and extra hands are welcome. The new mom has three to four doctor’s appointments weekly, and the babies go through at least 21 diapers every day.

Family, friends and neighbors have been generous in supplying food, diapers and formula which was especially helpful while Nelson was out of work to care for his wife and children. The couple has a GoFundMe page where well-wishers can donate to help them cover medical expenses and baby supplies.

Someday they would like to build a larger house – one with a bedroom for each daughter and at least five bathrooms, but that dream will have to wait. For now, it’s a tight squeeze in their small house and compact car but they’re grateful. Amber says that although they don’t have much, they are “blessed with their kids and the outpouring of love and support from friends and even from strangers.”