Most parents will tell you that meal times with toddlers can be trying, but for little Anna Reid, food is a source of fear. That fear, according to her psychologist, was brought on at a very early age due to the side effects of a rare genetic condition she was born with, 22q deletion syndrome. 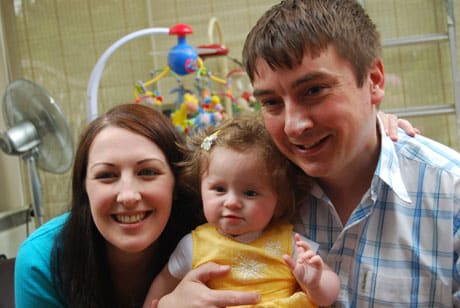 Anna’s parents, Katharine and David, learned that their daughter might have health problems during an ultrasound at 20 weeks when doctors found a hole in her heart. At birth, she weighed just 3 pounds, 11 ounces. Concerned about her heart and her weight, doctors decided to have some genetic testing done. It was at that time that Anna’s parents discovered that she had the rare condition, which affects only one in 4,000 infants in the UK.

“It was a big shock,” said Anna’s mother, Katharine. “The geneticist assured us the [symptoms] could vary so much, we would just have to see how Anna was affected.”

In the weeks that followed, doctors became concerned that Anna wasn’t putting on enough weight before her much needed heart operation. Her parents struggled to feed her because the heart defect was causing severe reflux, which, in turn, cause her to scream during her feedings. Before long, doctors became concerned enough that she was admitted to Edinburgh’s Royal Hospital for Sick Children.

While there, the cardiologist recommended that they place Anna on a nose tube, a device that would help her eat. But Anna struggled with the nose tube as well.

“Anna hated it. She started vomiting when the tube went down and her reflux got worse,” said Katharine.

Finally, doctors were able to calm her reflux down by changing the nose tube to a drip feed. Slowly, she started putting on the weight and eventually was able to have her surgery.

After the surgery, Anna seemed happier, more like a normal baby. But they were faced with a new struggle. While her reflux was gone, she refused to eat.

“Anna screamed if the bottle came anywhere near her,” Katharine said. “So they told us about another option – we could get Anna fitted with a peg in her stomach, which would be attached to a tube to feed her. We were willing to try anything.”

Through the tube, Anna’s parents fed her 600ml of high-calorie milk a day. She grew, put on weight and stopped being sick. But her parents hoped to wean her off of the tube and hoped to eventually get her to eat real food.

“Weaning her was the next battle. I tried to get her mashed-up food, but she didn’t like it,” said Katharine.

Exasperated at their lack of progress, Anna’s parents took her to see a psychologist. He determined that Anna’s fear of food stemmed from her illness. Somehow, the little girl associated eating with her illness.

But her parents refuse to give up. They continue to work with her. They make meal times fun and play games to coax her into eating. And while they have made some progress, the process is exhausting.

“Mealtime is a long and torturous process for me,” Katharine stated. “If she doesn’t like it, she throws it at me. She will only eat for me and my husband now.”

She is eating though, and her parents have helped her discover five foods that she does enjoy, including fish fingers, bananas and apples. And she has actually grown to enjoy her mealtimes. Afterwards, her parents provide her with the high-calorie milk to ensure she’s getting enough calories to grow and thrive.

According to Anna’s parents, things will continue the way they are for an undetermined length of time. They say that her doctors won’t even consider removing the tube until she is eating everything orally for at least six months. For now, “she’s nowhere near that.”

As Anna ages, things become more difficult. When they go out or on vacation, they have to plan ahead for her feedings. And she starts nursery school next year, which will present the need for even more planning for feedings.

Yet, despite their food woes, Anna’s parents say that they are “lucky.” Anna has few issues, compared to other 22q deletion children – problems that range from cleft lip or palate to serious heart complications and behavioral problems. While food is an issue and she weighs in a little on the small side, Anna seems to be an otherwise happy and vibrant little toddler.