Because of a photo post she saw on Facebook, Nancy and husband Tim Swabb of the Edgewood neighborhood near Chicago became the host family for a baby born halfway around the world from them in Cote d’Ivoire. The little girl desperately needed life-saving surgery that could be done at a hospital just seven miles from their family home. 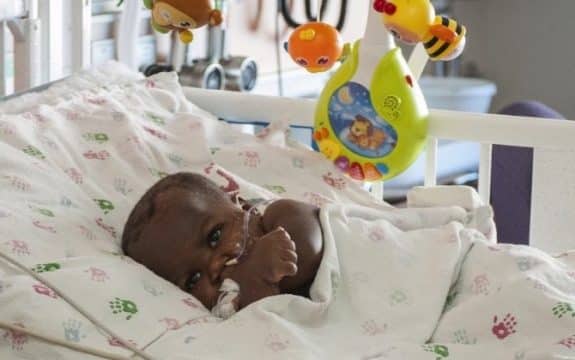 Dominique had a twin who never fully developed in the womb, instead fusing with her. This rare condition is known as a parasitic twin. The underdeveloped twin was entirely dependent on Dominique’s body. The baby was born with her parasitic twin’s waist, legs and feet growing out of her small body, and two closely connected spines. 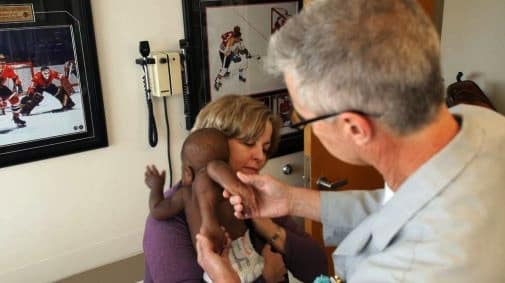 Unless surgery was done to remove the parasitic twin, Dominique’s life would be short and painful. Her tiny heart and lungs were working overtime to support two bodies, and the mass of kicking legs attached to her back and neck would continue to grow, causing deformity and abnormal spinal stress. To save this child’s life, a foster family was needed near a hospital equipped to handle the risky surgical procedure.

Nancy’s neighbors stepped up to help supply the family with items they’d need for the fostering – diapers, formula, a playpen, car seat, and stroller. The baby arrived on February 5 and immediately bonded with Swabb’s adopted teenage daughters.

“When we met sweet Dominique … we thought about her family, far far away, trusting us, trusting the doctors that she had never met, trusting the escort that flew her halfway across the world,” Nancy told Children’s Advocate Hospital. “There was a bond right away.”

Dominique met welcoming neighbors on daily walks in her stroller. Her bright, happy eyes, affectionate nature, and bubbly personality endeared little Dominique to everyone she met.

To prepare for the March 8 surgery, the baby underwent numerous tests at nearby Advocate Children’s Hospital, including an MRI, MRA, CAT-scans, X-rays and a CT myelogram that helped surgeons analyze the connection with the parasitic twin. These tests enabled them to create a 3-D model of the two spines and led them to the discovery of a second bladder behind the extra limbs that would need to be removed during surgery.

“There were many risks involved with detaching the parasitic twin, the biggest of which included paralysis, spinal destabilization and closure of a large defect,” said Dr. Frank Vicari, pediatric plastic/reconstructive surgeon. “There also was a chance of impacting shared functions, such as the urinary function. Before going into the operating suite, our interdisciplinary team identified where the dangers would be and how we would minimize them. That way we were prepared for anything that could occur. 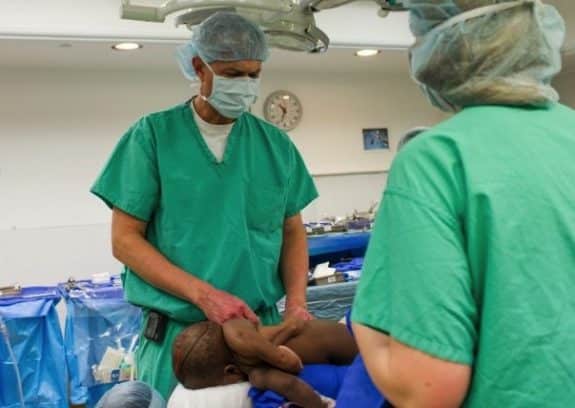 Pediatric neurosurgeon Dr. John Ruge selected a team – five additional surgeons and more than 50 physicians spanning specialties across the hospital – to prepare for the complex operation. The team worked for six hours, removing the entirety of the parasitic twin, disconnecting nerves and blood vessels so Dominique wouldn’t sustain damage, have numbness or paralysis. The baby exceeded doctor’s expectations and is two pounds lighter now. She recovered quickly enough to sit up on the day following her surgery, and went home with the Swabb family after only five days.

Doctors foresee no complications or need for further surgery, although the little girl actually still has two spines, so intertwined that doctors cannot be sure which is her body’s structural support. 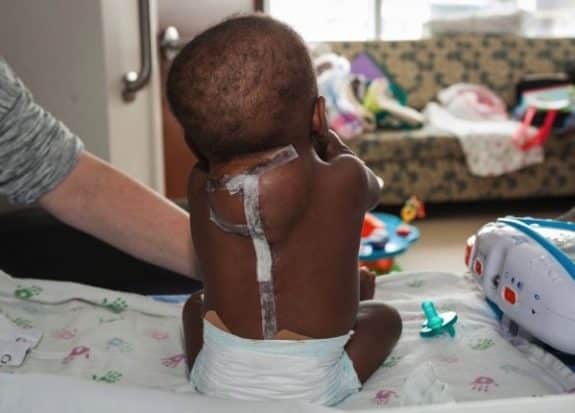 Swabb’s family will continue to care for the baby until mid-April when she is expected to be medically released and able to return to her birth family in Cote d’Ivoire. Nancy hopes the two families can meet one day, and although her own family has fallen in love with little Dominique she says that they’re excited for the birth family to be reunited with their child. She says “having a connection with a family you’ve never met is amazing. You have trust in each other.”

Now Dominique is healthy and ready for her new life, thanks to the kindness of strangers who have become extended family.