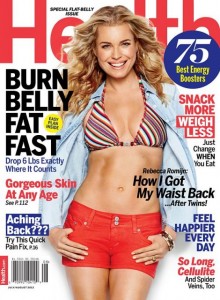 Rebecca Romijn has a busy life; keeping up with an acting career, actor husband Jerry O’Connell and their twin girls, Charlie and Dolly, now three-and-a-half should be enough to keep her schedule full. Yet somehow, she managed to drop the baby weight, has time for some fun and is keeping her five year marriage fresh and vibrant. How does she do it? She recently shared her secrets in an interview with Health magazine.

Losing the baby weight has to be one of the most insurmountable tasks for new moms. Rebecca says that her tricks to success include a little cheating and a lot of exercise.

“I’m not really about deprivation. If I want a piece of pie, I mean – come on – you have to enjoy life! Especially if you have kids. I usually keep Sunday for whatever-you-want-to-eat day,” Rebecca says.

But that indulgence has a balance. Instead of grabbing chips or unhealthy snack foods when just lounging, Rebecca says she reaches for an apple.

“I use the apple trick. If you’re sitting in front of the TV and just want something to much on, I’ll go for an apple. Refrigerated Fuji apples, nice, crisp, sweet. Man  I  love ‘em,” Rebecca said. “Eating apples is good on so many levels. There’s fiber in the skin that’s really good for you. It helps with digestion and helps you absorb all the nutrients of everything you’ve eaten that day. Apples are a really good thing.”

And just in case she needs to drop a few extra pounds, Rebecca says she reaches for the cranberry fat flush.

“There’s a cranberry flaxseed water recipe I drink. I’ll make a liter of it and try to get through that in a day. (I also eat clean. I’m not into the ‘not eating’ thing),” Rebecca said. “You have to shake it up  every single time to make sure you get some of the flax, and it’s like drinking a slightly sour water. I drink that for a week and it really helps flush fat.” 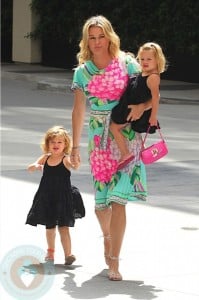 Working out is also important, Rebecca says. “Especially cardio and yoga. It’s a big part of my recipe for happiness.”

But just in case you thought she’d had it easy, she says that she struggled with finding a way to drop the pounds after the twins were born.

“After I had my babies and was struggling to lose that last bit of weight, I had to challenge my body in a different way,” Rebecca said. “Bikram yoga was key. You sweat so much, you’ll lose poundage. Though honestly? I dread it every time. [But after} I’m grateful for it.” And she says she even has a hard time pushing herself to the level she needs to reach sometimes, so she uses a few tricks to get that heart rate up. “I really like listening to music when I’m hiking or exercising. I don’t like hearing myself breathe. I’m like, ‘Am I dying? I think I’m breathing too hard. This is bad. I’m sure this is bad. I should slow down.’ I really don’t do myself any favors.”

Keeping the Stress Levels Under Control

Everyone has stress in their lives, even famous actresses like Rebecca. But it’s all in how you deal with it.  For Rebecca, sunshine is her stress medicine of choice.

“My dad, in his adorable Dutch accent, has always said, “Sometimes you just have to sit and stare at your belly button,’” she said. “I think it’s an important part of everybody’s day. Park it! It’s very calming. I do it in a sunny spot. And usually one or more of the two dogs and two cats wants to sit there with me!” 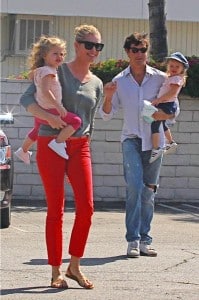 Another important part of her stress relief regimen? Vacationing!

“The Hotel Costes in Paris is the best-smelling hotel. So I just bought their candles,” Rebecca said. “But I have to wait until Jerry is not in the house because he has a fear of fire-anytime he sees a candle burning in our house, he blows it out!  I’m always lighting them, and he’s always blowing them out!”

Since we’re on the subject of her marriage…Rebecca says, “Don’t forget the sex!”

But besides that, she also says that a tandem bike has helped keep her marriage happy and healthy.

“Jerry and I bought a tandem bike a few years ago,” she said. “He’s in the front and I’m in the back – and if you’re in back, you can’t see where you’re going. He’s one of these daredevil guys, and I’d be screaming my head off at him. But at a certain point, I would just surrender to it and start working with him. Riding a tandem bike became the best marital therapy you could ever possibly ask for. We would always come back completely different – in sync, the team again.”

About Being Mom to the Adorable Twins

Rebecca says that one of her favorite things to do with her daughters is dance. Not only is it another one of her stress relieving tips, it’s also a lot of fun!

“My mom used [dancing] as a tool to work herself out of a bad mood,” she said. “I remember dancing around the house to ‘We Are Family.’ I’m introducing the girls to the Beatles and Stevie Wonder.  We have a little disco ball in our living room; we love our dance parties.”

But all of that dancing (and of course everything else that’s a part of her day) means making sure she gets enough sleep.

“Sleep is so important,” she said. “But as soon as you become a mother, you’re always a little bit awake because your one ear is always sort of listening.”