Britax Child Safety, Inc., is announcing a recall of 17,251 Chaperon Infant Car Seats sold in the United States because the occupant harness chest clip may break as an infant is being secured into the car seat. Britax is also recalling 2,350 of the same seats sold in Canada. 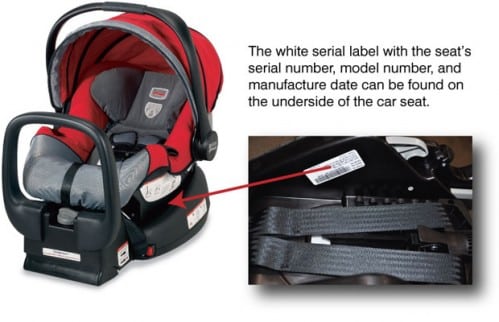 It was recently determined that the chest clip supplied with the Chaperone Infant Car Seat was incorrectly produced by the manufacturer which resulted in a more brittle chest clip than was intended. As a result, the chest clip which positions the harness straps across the infant’s shoulders may break when the chest clip is
engaged as the infant is secured into the infant car seat. The sharp edges of the broken chest clip create a risk of a skin laceration and the fractured components of the chest clip may present a small parts/choking hazard.

The car seat manufacturer said it had approximately 400 complaints of broken chest clips, including reports of three minor injuries (scratches) to children or caregivers, and one report of a child placing a broken component of a chest clip into the mouth.

If your chest clip breaks, remove the broken chest clip from the harness along with any fragments.  The CHAPERONE Infant Car Seat can continue to be used until the replacement chest clip is installed.

Consumers wishing to get further information about this recall, or order the free replacement chest clip should contact Britax Child Safety, Inc., at (888) 427-4829 or at www.chaperoneseatrecall.com