Home » RECALL: 2 MILLION Graco Quattro™ and MetroLite™ Strollers Due to Risk of Entrapment and Strangulation

The U.S. Consumer Product Safety Commission (CPSC), in cooperation with Graco Children’s Products Inc., of Atlanta, Ga., is announcing the recall of about 2 million Graco strollers due to risk of entrapment and strangulation. CPSC and Graco have received four reports of infant strangulations that occurred in these strollers between 2003 and 2005. In addition, CPSC is aware of five reports of infants becoming entrapped, resulting in cuts and bruises, and one report of an infant having difficulty breathing. 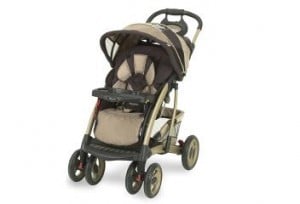 Entrapment and strangulation can occur, especially to infants younger than 12 months of age, when a child is not harnessed. An infant can pass through the opening between the stroller tray and seat bottom, but his/her head and neck can become entrapped by the tray. Infants who become entrapped at the neck are at risk of strangulation.

The recall involves older versions of the Graco Quattro Tour™ and MetroLite™ strollers and travel systems manufactured prior to the existence of the January 2008 voluntary industry standard which addresses the height of the opening between the stroller’s tray and the seat bottom. This voluntary standard requires larger stroller openings that prevent infant entrapment and strangulation hazards.

The name “Graco” appears on a label on the stroller tray and the headrest. Models included in the recall are:

Consumers should immediately stop using the recalled strollers and contact Graco for a free repair kit. To order a repair kit, contact Graco toll-free at (877) 828-4046 anytime, or visit the firm’s website at www.gracobaby.com. Consumers can continue use of the stroller as a “travel system.” When the stroller is used with the infant car seat, the entrapment and strangulation hazards posed by the space gap are not present.