Home » RECALL: 535,000 Stork Craft Cribs Due To Risk of Entrapment and Suffocation 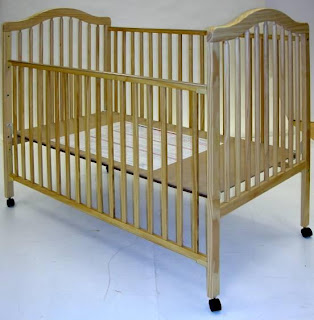 The U.S. Consumer Product Safety Commission, in cooperation with Stork Craft Manufacturing Inc, today announced a voluntary recall of about 535,000 Stork Craft Cribs because he metal support brackets used to support the crib mattress and mattress board can crack and break. When one or more support brackets break, the mattress can collapse and create a dangerous gap between the mattress and crib rails, in which a child can become entrapped and suffocate.

This recall involves Stork Craft Baby cribs. All cribs with manufacturing and distribution dates between May 2000 and November 2008 are included in this recall. The cribs were sold in various styles and finishes. The manufacture date, model number, crib name, country of origin, and the firm’s name, address, and contact information are located on the assembly instruction sheet attached to the mattress support board. The firm’s insignia “storkcraft baby” is inscribed on the drop side teething rail of some cribs.

CPSC urges parents and caregivers to immediately stop using the recalled cribs and find an alternative, safe sleeping environment for their baby. Consumers should contact Stork Craft at (866) 361-3321 anytime to order the free replacement kit or log on to www.storkcraft.com to receive a free replacement kit, with new mattress support brackets.