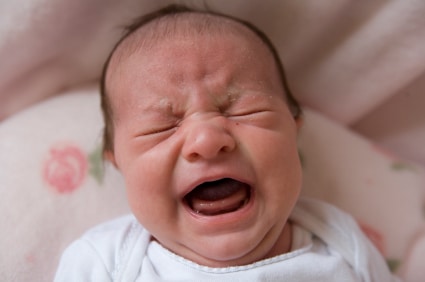 Every new parent will tell you that the first few weeks are full of crying, on both the part of parent and baby. Lack of sleep, colic, adjustment to a new world, stress, breastfeeding troubles and so much more can push parents to the brink of insanity. Sadly, this can sometimes result in a myriad of stress-related situations: marital troubles, shaken babies and breastfeeding failure.

In an attempt to save stressed out parents, Dr. Harvey Karp, author of the book, The Happiest Baby on the Block, offers parents the 5 S’s: a method used for calming infants under four months of age. Dr. Karp says that the 5 S’s were discovered after realizing that infants are born with a calming reflex. If tapped, this reflex can help soothe babies almost immediately, making those early weeks of raising an infant less stressful.

So does it really work? According to authors of a recent study, the answer is yes, even under some of the most stressful of circumstances.

Published in the journal Pediatrics, pediatric residents at Children’s Hospital of the King’s Daughters in Norfolk, VA, enrolled 230 2-month-old and 4-month old infants into their study.  Infants enrolled in the study were scheduled to receive regular childhood immunizations at their visit.

Infants were divided into four groups and they received either the 5 S’s or a parent’s standard method of comforting after they received their shots. They were also offered either sugar water or plain water to determine if a 6th S might make an impact.

During their visit, residents delivered three shots into alternating thighs. For those in the S groups, residents swaddled (the first S) the infants in less than 15 seconds after the shot was administered. At least three more of the S’s (Shhhh, side/stomach, sucking, and swinging) within 30 seconds. Some infants did not receive the sucking S because they were either unaccustomed to using a pacifier or they calmed down before it was implemented.

In both the parental comforting and 5 S groups, residents rated the infant’s pain levels immediately after the third shot and at regular intervals up to five minutes afterwards. Infant pain levels were gauged based on their facial expressions and how hard they were crying.

After compiling the data, researchers found that the infants were calmed significantly better by the 5 S’s than they were by their parent’s usual comforting methods. Researchers did not find, however, that sugar made any difference in the infant’s overall pain level.

Dr. John Harrington was the lead author on the study and he says that the idea presented itself after he had heard Dr. Karp speak. He says that he and other physicians had previously administered or recommended infant’s Tylenol to help reduce pain, but recent studies have found that the drug may reduce the efficacy of immunizations. Breastfeeding is an effective method for comforting infants after immunizations. But, as Dr. Harrington noted, not all infants are breastfed, so not all infants can be comforted in this way.

Dr. Harrington is very pleased with the effectiveness of the 5 S’s after immunizations and said that even parents were amazed. Many asked residents to teach them the technique so that it could be used at home.

“I think the nice thing that came out of this is when we did the 5 S’s after the shots, the parents wanted to learn,” Harrington said.

Parents should know, however, that the calming reflex seems to dissipate and eventually go away somewhere around three months of age, according to parents that have used the technique. Data from the study backs this up as well; infants in the four-month-old group did not respond as well to the 5 S technique after their immunizations.

Dr. Karp noted that the 5 S technique isn’t “just about immunizations.” He says that any parent can use it at any given time. But he provides a warning with this as well:

“Parents do many of these things intuitively, but they may not be doing them correctly. You have to do them exactly right, or they don’t work.”