Home » Remains Found Believed To Be Those Of Caylee Anthony 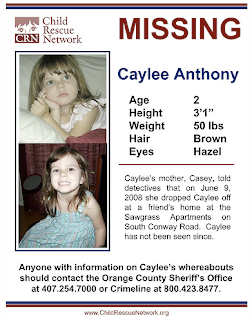 Tim Miller, the founder and director of EquuSearch, said the remains “appear to be Caylee, but with any case, we have to wait until a positive ID is made.”

Todd Black, the spokesman for Casey Anthony’s defense attorney, said the utility worker picked up the bag and a skull rolled out of it.

Residents said duct tape was found around the skull, but those reports have not been confirmed by law-enforcement official.

“We certainly hope it isn’t [related to the Anthony case],” Black said. “If it is, it is a sad day.”

Dr. Lee Jantz, coordinator of the forensic anthropology center at the University of Tennessee, told the Associated Press that it is more difficult to identify a child’s body than an adult’s. The first thing medical examiners will do is compare photos of the child with the skull, in hopes of making a bone structure comparison. Because this is a high-profile case, the DNA of the bones will also be tested.

The three-year-old was reported missing July 15, after it took her mom 5 weeks to tell police her daughter was missing.

During that time, the toddler’s mom Casey Anthony was indicted in October on first-degree murder, aggravated child abuse, aggravated manslaughter of a child and four counts of providing false information to law enforcement.

Casy is being held without bail at the Orange County Jail.