There is a growing trend that women are having babies later in life. But one mom took that to the extreme.

Today a clinic in Wels-Grieskirchen, Upper Austria, revealed that one of their patients, a 60-year-old woman had given birth to twins following IVF treatment.  Since 1970, only two women have given birth to children at the age of 60 in Austria, but not twins.

The pregnancy, head of the clinic’s obstetrics department, Klaus Reisenberger, told the Neuen Volksblatt paper, was made possible by using an egg donor from abroad.

“These twin birth is also for us as obstetrics department an absolute exception. Something like that is far outside the norm,” Dr. Reisenberger told Krone.at.  The doctor didn’t want to reveal any details but confirmed that the twin boys and their mother are doing well. 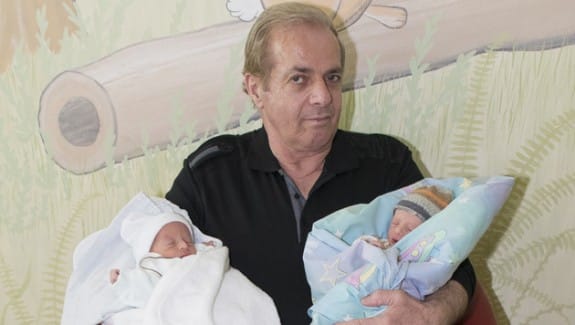 The proud father with his twin sons Eldion and Elmedin.

Until recently IVF treatments using donated eggs or sperm other than from a spouse was banned in Austria. In January the law on reproductive medicine was amended to allow donations as long as the recipient is aged 45 or younger.

Whether artificial insemination for older women “medically makes sense, is an interesting question,” Dr. Reisenberger said.  The pregnancy of a 60-year-old is prone to complications, even if everything went well in the current case.  Adding that he didn’t want to make an ethical judgment, but  “if someone had not donated the eggs, these children would not be in the world now”.

He also noted that it was “an interesting question, if it makes medical sense” to allow IVF treatment for older women. IVF treatment is known to become less effective with age, and there are also concerns for the resulting children’s welfare.