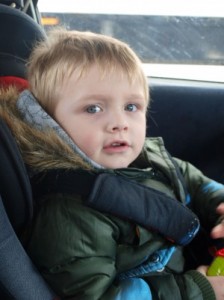 Authors of an abstract to be presented today at the Pediatric Academic Societies (PAS) annual meeting in Denver call it ‘absolutely unacceptable’ to subject children to any tobacco smoke exposure in cars and I agree.

Abstract co-author  Dr. Jonathan P. Winickoff, MD, MPH, FAAP. and his colleagues conducted a survey to determine the prevalence of tobacco smoke exposure in cars among children in an effort to create awareness of the dangers caused by second hand smoke.

“An infant strapped into a car seat is involuntarily and intensely exposed to more than 400 toxic chemicals in tobacco smoke,” Dr. Winickoff, stated “They have no voice and no choice in whether their parents smoke in the car.”

For the survey parents who visited one of seven pediatric practices in six states with their child for either a well of sick visit were questioned about their personal policies on smoking while in the vehicle.  The parents who smoked were asked if they had a car, whether they had smoking rules in their car, their child’s age and if their pediatrician advised them to have a smoke-free car.

Of the parents who reported smoking in their car, 52 percent said smoking occurred with a children present and only 14 percent of parents said they were advised by a pediatric health care provider to have a smoke-free car.

“Because they have smaller air passages than adults, infants and children are more sensitive to chemicals in tobacco smoke and suffer increased asthma attacks and severe respiratory infections,” said Dr. Winickoff.

“Coupled with the finding that few pediatric health care providers advise against smoking in cars, these results highlight the need for improved pediatric interventions, public health campaigns and health policy regarding smoke-free car laws to protect children from tobacco smoke toxins,” he said. “Setting strict rules about never smoking in cars will benefit the whole family and help reduce tobacco use nationally.”

According to nosmoke.org the following states have Smoke-Free Car Laws:

Sadly there are only 5 states on the list so lots of work needs to be done.

When someone smokes in the small enclosed space of a car, passengers are exposed to toxic air that is many times higher than what the EPA considers hazardous air quality, even when a window is down. Additionally, the gaseous and particulate components of tobacco smoke absorb into the upholstery and other surfaces inside a car, and then off-gas back into the air over the course of many days, exposing passengers to toxins long after anyone actually smoked in the car.

While the law is important, it is only in effect when the driver is traveling with a minor. Third hand smoke left behind on car seats or other items left in the vehicle are also an issue for young passengers.

Nosmoke.org notes that a smokefree car campaign should be accompanied by a strong education effort, stressing the health hazards of smoke-filled vehicles.

Campaigns for smokefree car laws can serve as a tool to educate the public about the health hazards of secondhand smoke exposure and improve decision making about smoking in ways that harm other people.