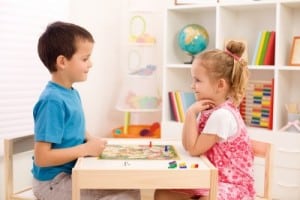 In preschools, particularly those that cater to low-income or delayed children, toddlers are often separated into advanced and delayed groups. A recent study indicates that this separation may actually hinder the improvement of language skills for toddlers that are behind.

Lead author of the study and professor at Ohio State University’s School of Teaching and Learning studied 338 children in 49 different preschool classrooms. Children that were already delayed in language skills who were placed in a classroom with other children who were delayed actually fell back further, according to the authors. In contrast, delayed toddlers that were placed in an average-ability classroom actually improved their language skills during the school year.

Interestingly, those who were considered advanced in language development were not affected, regardless of which classroom they were placed in. Because the advanced children do not suffer but do aide the delayed preschoolers, Justice says that preschools should be more mixed in the abilities and development of the children in each classroom.

“The way preschool works in the United States, we tend to cluster kids who have relatively low language skills in the same classrooms, and that is not good for their language development,” Justice stated in a press release. “We need to pay more attention to the composition of preschool classrooms.”

Published in the journal Child Development, the study did not indicate why the language skills of the delayed preschoolers was affected when placed in an advanced or average classroom, but the author is certain of this:

“If we really want to help lift kids out of poverty, and use the preschool as a way to make that happen, we need to reconsider how we provide that education. Classrooms that blend students from different backgrounds are the best way to provide the boost that poor students need.”