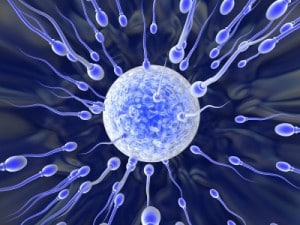 For some men, a single, defective protein could be the cause of infertility. That’s what researchers from Cardiff University in the UK are saying in their most recent research paper being published in the medical journal Fertility and Sterility.

Professors Tony Lai and Karl Swann, leaders of the research team at the University’s Institute of Molecular and Experimental Medicine, discovered that sperm transfers a vital protein to the egg during the fertilization process. This protein, otherwise known as PLC-zeta, or PLCz for short, activates the egg, triggering the biological process of early embryo development. Researchers also found that an egg is not activated when a defective PLCz protein is present in male sperm – this problem has been linked to some forms of male infertility in the past.

“This one sperm protein, PLCz, is absolutely critical at the point where life begins,” said Dr. Lai. “We know that some men are infertile because their sperm fail to activate eggs. Even though their sperm fuses with the egg, nothing happens. These sperm may lack a proper functioning version of PLCz, which is essential to trigger the next stage in becoming pregnant.”

But after preparing an active, human form of the protein, researchers were able to inject the egg and kick-start the fertilization process. In effect, the egg responded “exactly as it should do at fertilization, resulting in successful embryo development to the blastocyst stage, vital to pregnancy success.”

Unfortunately, there is still much research to be done before this technology can reach real human clinical trials. Still, there is hope for the future. Previous studies on PLCz have only been done on mice; this is the first successful experiment using a human PLCz protein.

“Whilst this was a lab experiment and our method could not be used in a fertility clinic in exactly the same way, there is potential to transfer this advance into humans,” Lai said, adding that it may be possible in the future to make a human PLCz protein and “use it to stimulate egg activation in a completely natural way.”