Health care organizations and professionals have been advising parents to turn of the television during family meals for some time now. But in today’s world, there are many ways that we can gain access to media. Teens (and probably parents alike) are taking advantage of these mobile devices during meal times, and researchers are concerned that it may have some negative consequences for families. For this reason, researchers are encouraging parents to set rules and limits on media devices when it comes time to eat. 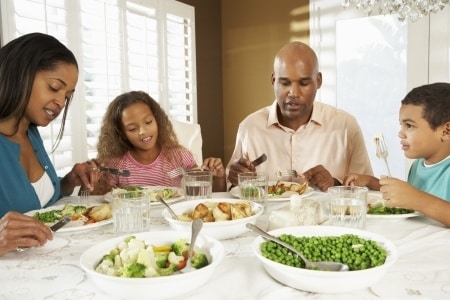 Jayne A. Fulkerson and her colleagues asked more than 1,800 parents how often their teens watched television, talked on the phone, text messaged, played games or listened to music with headphones during family meals. Parents were also asked if they set limits on media usage during mealtimes. The teens were then asked how well they felt their family communicated and how often they discussed problems with their parents.

Nearly two-thirds of all parents reported that their teens watched television or movies during family meals at least some of the time. About one-quarter of them said the television was on frequently. Texting or talking on the phone, listening to music with headphones and the use of handheld games was less common, but still about 18 to 28 percent of parents reported that these activities took place during mealtimes. Girls were more likely to use electronic media than boys during mealtime, and usage tended to increase with age.

“The findings of this most recent paper showed that mealtime media use is common among families with adolescents, but that setting rules around media use at meals may reduce media use among teens have other positive benefits as well,” Fulkerson, the lead author on the study, told Reuters Health in an email correspondence. “Parents who are having family meals with media could choose to make some rules excluding media at mealtimes and spend more quality time with their children.”

But teens aren’t likely the only ones using media at the dinner table. Although parents were not asked about their media usage during mealtimes, Fulkerson said this study, as well as some of her previous ones, have “indicated that there is a lot of multitasking going on.”

What was most interesting was that Fulkerson says most children will talk about themselves and their lives during mealtimes, if given the opportunity. And, since better communication and family meals have been found to linked to higher self-esteem among adolescents, boundaries on media usage at mealtimes (for both parents and teens) may be something worth considering.

“Perhaps they will have greater feelings of connectedness as well,” she said. “Mealtimes are a great venue for this. Of course, it is not true for every family, but fits for many.”

Of course, we all have busy lives, and sometimes media usage may be necessary. And there may even be some instances in which families wish to make television with dinner a special family event. The key, Fulkerson says, is balance.

“There is no magic number of how many [family meals] to have, not all food at meals has to be 100% healthy and having electronic media at meals is not all bad (e.g. the occasional movie and pizza night) if it facilitates family time,” she said. “But parents can take small steps to have quality time with their children by reducing media use at mealtimes.”