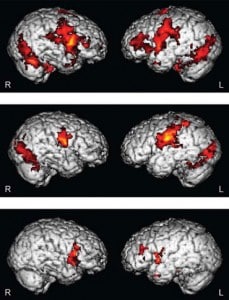 For their study, Fred Volkmar, M.D., Kevin A. Pelphrey and their team of researchers monitored the brain activity of two different autistic children while performing an early treatment method known as “pivotal response treatment.” This relatively new program, developed at the University of California Santa Barbara, requires parental involvement and uses “play” situations to help improve behavior. It incorporates learning and developmental factors and it is easy to use with young children.

To measure brain activity, the researchers used magnetic resonance imaging (MRI) and electroencephalograms. In the two participating children, researchers were able to detect higher levels of brain activity in the regions of the brain commonly associated with social perception.

While the study is rather small, researchers are now conducting the same study on 60 autistic children. They are hoping that this larger study will help them further determine which autistic children will best benefit from pivotal response treatment or how much improvement a parent can expect from this particular type of early intervention.

“ASD is a heterogeneous disorder, and research aimed at understanding treatment must address this heterogeneity,” Dr. Pelphrey told Medical News Today. “Both the children in our current study made progress, but their degree of progress and level of skills at the end of treatment were distinct.”

“Autism research has come a long way,” Dr. Volkmar added. “These finding are exciting because they show that early intervention works in autism.”

It is also worth noting that Volkmar and his colleagues are diagnosing children as young as 1 with autism. Generally, children are not diagnosed until around the age of 3-5. With earlier, effective intervention options, autistic children may be able to better cope with life and form deeper, longer-lasting relationships with others.

PHOTO (fMRI of an autistic child VIA Dana.org)