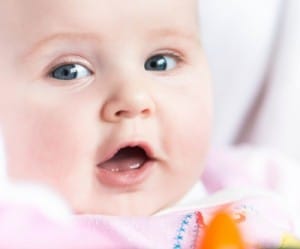 No one really knows when, exactly, memories start to form. But for decades, neuroscientists have been looking for some sort of evidence to give them the answer. They’ve been searching for that unmistakable sign of consciousness in the form of electrical brain activity. Finding that signal could help them determine more than just when babies start to form memories; it could also help them determine the awareness level of a sedated or minimally conscious adult.  And according to researchers from France, that signal can be seen in babies as young as five months old.

More than 240 babies were included in the French national research agency’s study. Infants were aged 5 months, 12 months and 15 months. Brain activity was measured with the help of electrode-filled caps. While about two-thirds of the infants were too squirmy for the caps, about 80 of the infants were able to sit still well enough to have their brain activity measured. Those remaining infants were shown a picture of a face on a screen for a fraction of a second.

Researchers were looking for what has been seen in adults – a pattern of brain activity known as “late slow wave.” When the senses detect something – a moving object, for example – the vision center of the brain activates. This happens, even if the object passes by too fast for the person to actually notice it. If, however, the object remains in the visual field long enough, the signal travels further back in the brain, to the prefrontal cortex. This is the area of the brain that holds an image long enough for the individual to notice. The whole process takes less than a third of a second, but it is this receiving of the message by the prefrontal cortex, or “late slow wave” activity, that researchers were looking for in the infants.

According to cognitive neuroscientist Sid Kouider of CNRS, the French national research agency, the patterns, while three times slower in babies at least a year old, were found in the form of event-related potentials, or ERPs.  Similar to “late slow wave” activity found in adults, these patterns were even found in babies as young as five months old. However, in infants this young, the activity was notably weaker and more drawn out than the activity found in older babies. Kouider speculates that the activity may even exist in infants as young as two months.

According to Kouider, the late slow wave could indicate conscious thoughts. He and his colleagues stated in the online journal Science that the wave, or feedback from the prefrontal cortex, suggests that the image is being stored briefly in the baby’s temporary “working memory.” And consciousness is composed of working memory.

But not everyone is quite as convinced as Kouider.

Cognitive neuroscientist Lawrence Ward of the University of British Columbia-Vancouver, who was not involved in the study, says he praises the patience of the French researchers, and he says that the work was well executed. However, he says this work is not the last word on whether or not babies this young are actually forming memories or conscious thought.

“ERP components change dramatically over the first few years of life,” Nelson wrote in an email to the AZ Star. “I would be reluctant to attribute the same mental operation (i.e. consciousness) in infants as in adults simply because of similar patterns of brain activity.”

Kouider says that these scientists are right. He added, however, that the ERP signature he saw had the same characteristics as those found in adults. He hopes to explore how these signals of consciousness actually connect to learning, particularly when it comes to language development.

“We make the assumption that babies are learning very quickly and that they’re fully unconscious of what they learn,” Kouider told The AZ Star. “Maybe that’s not true.”

What do you think? Do you believe your infant is conscious and aware of what they are learning? Do you think it’s possible that they’re already forming memories at such a young age?