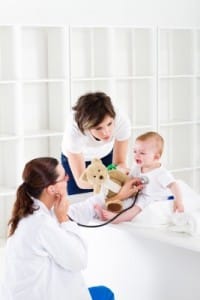 According to the World Health Organization, as many as 64 million children are diagnosed with RSV at any given time. Though most of these are mild, some of them can lead to pneumonia or bronchiolitis – conditions that land more than 144,000 U.S. children in the hospital each and every year, conditions that are potentially fatal if not treated quickly or properly.

“Despite the disease burden, there is no approved vaccine and it is impossible to predict which patients will go on to develop more serious symptoms and require hospitalization,” Asucion Mejias, MD, PhD, principal investigator in the Center for Vaccines and Immunity at Nationwide Children’s and a co-lead author on the new study told Science Daily. “The ability to identify which patients are at risk for severe RSV disease when they first present for treatment would enable physicians to better triage patients, providing early and more targeted interventions.”

One of the biggest obstacles in accomplishing this is the fact that there aren’t any diagnostic tools that help to predict which children will scathe by with lower risk infections and which will develop a more severe illness that would need more medical intervention. To try and resolve this, Mejias and colleagues compared the RNA profiles (biosignatures) of 220 children under 2 years of age – some of which had been healthy and others which had been hospitalized with RSV or other respiratory viruses, such as influenza or rhinovirus, which causes the common cold but can also lead to bronchiolitis.

After examining the profiles, researchers found specific genes involved in the function of interferon and neutrophils (key parts of the body’s immune system) had been activated, while genes that regulate the T and B cells in the adaptive immune system had been suppressed in patients that had developed RSV. This biosignature was then plugged into an algorithm that allowed the researchers to compare the expression of genes of patients and healthy controls. Essentially, it provided them with a “molecular distance to health” which ended up providing such precise scoring that researchers were able to determine how any days an RSV-infected patient had spent in the hospital or on supplemental oxygen.

“We showed that screening RNA profiles is a useful tool from the diagnostic point of view, as it allowed differentiation from influenza and rhinovirus infections with great accuracy,” Mejias said. “It also helps us better understand the pathogenesis of this infection and, more important, to objectively assess disease severity in these patients.”

In fact, this algorithm has proven so accurate that it could very well provide pediatricians and emergency room doctors with an accurate and tangible test that could help determine course of treatment when RSV is suspected. But according to Mejias, this tool may be able to do more than just diagnose – it could help aid care of RSV patients who are already being treated.

“These novel and affordable tools will have a much faster turn-around time that could facilitate the application of RNA profiles in ‘real time’ in the clinical setting,” Mejias said. “It may help triage patients when they first present to the emergency room or pediatric office, but it could also be used for monitoring clinical changes during course of the disease, with the ultimate goal of predicting clinical outcomes.”

What’s more, the study also provided researchers with a better understanding of the disease and how it affects the body’s immune system. This could lead to better treatments, and maybe even a vaccine – something that Octavio Ramilio, MD, a co-lead author of the study and chief of the Section of Infectious Disease at Nationwide Children’s, says that scientists in the Center for Vaccines and Immunity have been trying to accomplish for decades.

“We urgently need better treatments for this disease and eventually a vaccine that can prevent RSV infection,” Ramilo told Science Daily. “We need to do a better job educating our patients and their families about RSV and the huge morbidity associated with these infections.”