Premature birth can result in a number of complications, including respiratory problems, developmental disabilities, cerebral palsy and intraventricular hemorrhages. Prevention methods in preventing early labor are severely lacking, which puts many babies at risk. However, a new study may have found on possible genetic risk factor. 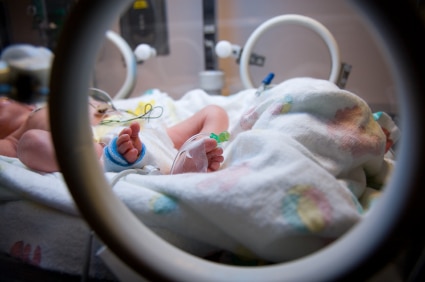 The discovery, which came after analyzing proteins involved in group B Streptococcus (GBS) bacteria (found in the vagina or lower gastrointestinal tract of about 15-20% of all healthy women), may even lead to the development of therapies against anti-biotic resistant infections, chronic diseases, HIV, and blood clotting problems. But for right now, the focus is on providing better prevention of the possible side effects of GBS infections, which can include sepsis or meningitis in premature infants.

“Pregnant women are universally screened for these bacteria during pregnancy and administered antibiotics intravenously during labor if they test positive to protect the infant from infection,” co-author Dr. Victor Nizet, professor of pediatrics and pharmacy at San Diego School of Medicine,” told Medical News Today. “Our research may explain why some women and their infants are at a higher risk of acquiring severe GBS infections than others.”

Interestingly enough, GBS is found only in humans. Not even chimpanzees, who share 99% of our protein sequences, have it.

“We have one protein that tells the body to attack the pathogen and another that tells the body not to attack it,” Raza Ali, PhD, lead author on the study, told Medical News Today. “Identifying the dual roles of these receptors and how they are regulated may provide insight for future treatments against GBS.”

However, some people are missing the attack-signaling protein, Siglec-14. This may throw off the body’s GBS balance, which could explain part of the reason that some women end up going into premature labor.

“We found this association in GBS-positive but not GBS-negative pregnancies, highlighting the importance of GBS-siglec crosstalk on placental membranes,” Varki said.

But this isn’t the first study that’s found interesting genetic variants that cause negative effects during pregnancy. Another study, which was conducted in 2006 by the Virginia Commonwealth University School of Medicine, found that a genetic variant accounts for the higher rates of premature birth in women with African American decent.

The nucleotide in the SERPINH1 gene is reduced the amount of collagen produced in the fetal membranes in this group of mothers. Because collagen lends strength to the membrane, the reduction makes them more prone to placental abruption.