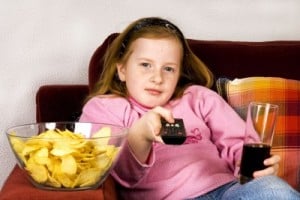 Other studies have found that children who watch more television are more likely to be overweight or obese, and these studies have surmised that the reasoning for this is the elevated marketing of unhealthy food products to children. But even those studies only looked at the actual weight of the children, not their overall eating habits.

According to the data, which was based on the overall eating habits of 12,642 private and public school students who watch an average of two-and-a-half hours of television per day, researchers found that each extra hour of television decreased the child’s likelihood of consuming vegetables or fruit by five percent and eight percent, respectively. They also found that each extra hour increased the child’s likelihood of consuming candy and soda each day by 18 percent and 24 percent, respectively. They were also 14 percent more likely to visit a fast food restaurant at least once a week for each hour of television watched.

What was most interesting about this particular study was that children who watched more television continued to have poorer eating habits, on average, even after researchers took into account the activity levels and frequency of in-front-of-TV snacking for each child, as well as the child’s age, gender, race and family income levels.

“The effect of television is extending beyond just when they’re snacking and watching television,” said Ronald Iannotti of the Eunice Kennedy Shriver National Institute of child Health and Human Development.

“It certainly is consistent with the idea that TV is maybe adversely affecting dietary intake and food choices,” said Leah Lipsky, a colleague of Iannotti’s who also helped work on the study.

Overall, the study should reinforce the idea that parents should limit their children’s television hours to help promote healthier eating choices, thereby limiting their exposure to food-related commercials; this includes “screen time” in front of a computer. Parents should also make healthy snacks readily available for their children and limit the frequency that unhealthy snacks are offered in the home. Parents should also know that other studies have indicated that children are not getting enough physical activity during the day and that outdoor play is an important part of a healthy lifestyle.