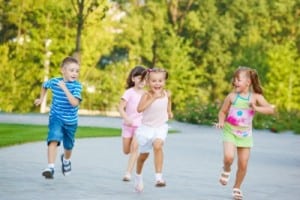 In a day and age where childhood obesity rates are on the rise, regular exercise is an essential component of healthy living for every child. But researchers are now saying that regular exercise goes further than just preventing obesity and obesity-related conditions. Recent studies have now linked regular exercise and better academic performance in children.

Data from fourteen studies, published in the Archives of Pediatrics & Adolescent Medicine, was used to support their claims. Children were evaluated on their grades in math and language as well as their general thinking skills and memory performance. Their academics were then compared to their level of physical activity.

Ten of the studies were “observational studies” in which the researchers talked to parents, teachers and students to determine how much they exercised. Researchers then followed the academic performance of the students.

In one of the studies, performed in the United States, second and third graders that received at least 90 minutes of physical activity per week performed better academically on reading and math. They also showed less weight gain over a three year time span than children that did not exercise.

In all studies, it was consistently found that children who exercised more performed better academically. The exact reason for the benefits is a little unclear, but researchers on the study do have a few theories.

Exercising increases blood flow to the brain. This could account for better concentration. Exercise also releases endorphins (a hormone that actually combats conditions like depression and anxiety), which could help in boosting children’s moods. This could help children be better behaved during learning time.

Worried about finding the right activity? Researchers say you don’t have to. The type of exercise didn’t seem to matter during the study. What mattered was that the children were active.

“Maybe it’s an activity break, stand up every half an hour in class and do something,” stated Amika Singh, one of the researchers who worked on the study. “It might mean going to school by bike…Any kind of physical activity you can think of. It doesn’t mean only the physical education standard class.”

Because the type of exercise doesn’t matter, Amika says that increasing the activity of children needs to be a joint effort between parents and the schools. She says that everyone needs to place an emphasis exercise to ensure that academic expectations can be met.

Unfortunately, more and more schools are removing things like physical education and recess from the school day. In my children’s school, they only have 15 minutes for recess, and physical education only occurs twice a week. My children are not alone.

Research has indicated that many children in the U.S. aren’t even meeting the physical education and recess guidelines set by the American Heart Association – two and a half hours of physical education each week and 20 minutes of recess per day. Add that to the fact that many children come home, do their homework, and then play video games or watch television. Then they head for bed to do it all over again.

As parents, it is our responsibility to ensure that our children get active. We also need to make our concerns heard in the schools. Whether it’s a PTA meeting or a petition to include more exercise during the school day, it is time for parents to start speaking out so that schools recognize that physical activity at school is an essential part of the day. To fight obesity, to improve academics, children need to be active.