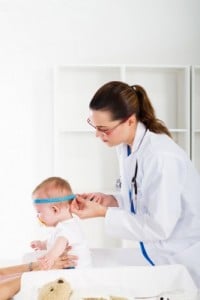 Obesity in children can have a profound effect on a child’s life because it increases their risk of numerous health problems, and it also can create emotional and social problems. To help warn parents early on, researchers now say that if babies have passed two key milestones in the doctor’s growth chart by the age of two, these infants are likely to become obese later on.

The researchers from Harvard Medical School found that infants who grew so quickly that they bypassed two key milestones in the growth chart had double the risk of getting obese by the age of five that other kids.

The rapid growers were also likely to be obese by the age of 10 and infants whose chart numbers climbed that much during their first six months faced the greatest risks.

According to pediatrician Dr. Elsie Taveras, the study’s lead author and an obesity researcher at the school, the signs should act like a red flag to doctors and parents. It may show that the babies are being overfed or are spending too much time in their strollers instead of crawling around.

The researcher noted that contrary to the belief that chubby babies are healthy babies, the research shows it is in reality not a good sign.

There are some experts however who do not believe the research to be entirely conclusive.

Dr. Michelle Lampl, director of Emory University’s Center for the Study of Human Health said that parents could read the signs in a different way as not all infants have the same growth bursts. Babies often grow in spurts and flagging the speediest growers could lead to putting infants on diets, warned the doctor.

“It reads like a very handy rule and sounds like it would be very useful — and that’s my concern,” Lampl said. “The guide would be easy to use to justify feeding infants less and to unfairly label them as fat. It could also prompt feeding patterns that could lead to obesity later” she said.

The study involved 45,000 infants and children younger than age 11 who had routine growth measurements during doctor checkups in the Boston area from 1980 through 2008.

Growth charts used by doctors are a useful tool in predicting the healthy growth of babies and children in terms of height and weight. The charts are in relation to the average height and weight of children of the same age. Pediatricians sometimes combine an infant’s measures to calculate weight-for-length — the equivalent of body-mass index, or BMI, a height-to-weight ratio used in older children and adults.

The charts are usually shown in percentiles and the study authors looked at the growth pace in the 5th, 10th, 25th, 50th, 75th, 90th and 95th percentiles. Therefore, an infant whose weight-for-length jumped from the 19th percentile at one month to the 77th at six months crossed three major percentiles — the 25th, 50th and 75th — and would be at risk for obesity later in childhood, the authors said.

The researcher said that larger infants were at a greater risk but even those infants that were small but showed a jump of two percentiles, were at a risk of getting obese later.

About 40 per cent of infants crossed at least two percentiles by age six months. An analysis of more than one-third of the study children found that 64 per cent grew that rapidly by age two.

Dr. Lampl however feels that the though some infants did cross two percentiles, there were only 12 percent who were obese at age five and slightly more at age 10.

Lampl and Edward Frongillo, an infant growth specialist at the University of South Carolina said in the editorial accompanying the published research in the journal Archives of Pediatrics & Adolescent Medicine that more research was definitely necessary to ensure that kids could be definitely flagged as obese at such a young age.

“The potential to do more harm than good is actually very high,” Frongillo said.

Dr. Joanna Lewis, a pediatrician at Advocate Lutheran General Hospital in Park Ridge, Ill feels though that the research is a start at infancy is not an early age to think about obesity.

“It’s not a life sentence,” and there are steps parents can take to keep their babies at a healthy weight without restrictive diets, she said.

She also pointed to the fact that many parents fed their baby solid food and juices even when the guidelines suggested only breast milk or formula in the first six months. The finding could at least help these parents to check their child’s status early on.

“The study reinforces what we try to tell parents already: Delay starting solids and don’t put juice in a bottle,” Lewis said.

Lewis also suggests parents to have family meals together with the baby when he is starting food as it has been found that children in families who have meals together tend to be less obese.