Home » Can Robots Surpass Humans in Helping Kids With Autism?

The development of robot-enhanced therapy for children with autism spectrum disorders (ASD) is taking a step forward thanks to research from the University of Portsmouth and the DREAM project. DREAM is designing robots that can operate autonomously and help human therapists improve autistic children’s social interaction skills. 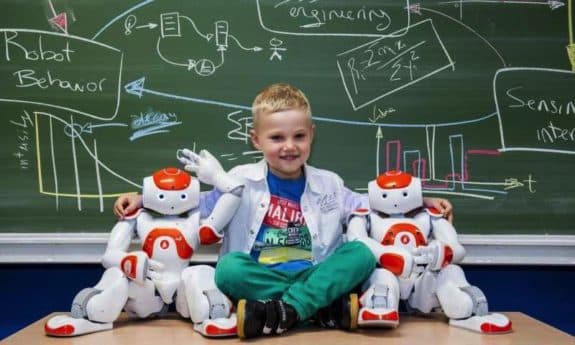 Children with ASD seem to engage more readily with robots than with humans, probably because the robots are simple and more predictable.

The current crop of robots used in ASD therapies are simplistic: models remote-controlled by the therapist and requiring a lot of time and human resources to operate. But robot-assisted therapy (RAT) has already demonstrated a lot of potential, so the DREAM project will develop a new generation robot that minimizes therapist intervention and focuses more on the child. Still better, the DREAM robot will also function as a diagnostic tool, collecting clinical data during the therapy sessions.

The University of Portsmouth research group aims to capture data from the children via the robot – motion and gestures, facial expression and gazes, sounds and voice – and make their robot able to understand what the child is doing so the interaction improves.

This team is very experienced in multi-sensory data fusion. They have already developed a multi-camera smart environment that consists of a NAO robot and high-resolution cameras that is able to track and measure facial expression, motion, and interaction with the robot.

The lead researcher on this project is Honghai Liu, a professor of intelligence systems, who says that “DREAM is a project that will deliver the next generation of RAT robots.” He also says that its core is being a cognitive model able to interpret sensory data and use that data to assess and map behavior, thus providing appropriate robot actions and reactions as specified by human therapists. Liu adds that “the multi-sensory data we capture will provide quantitative support for diagnosis, care and treatment for ASD.”

As the project moves forward to the next phase, 40 children with ASD will take part in a study at a Romanian university that involves half of the group receiving robot-assisted therapies and the remaining half undergoing standard therapy.