It is believed that 60% of all twin births occur before 37 weeks.  And while the reason for their early arrival can be caused by many factors like fetal stress, an incompetent cervix, or hormonal changes, often a premature birth is just spontaneous.  But for one mom, carrying twins, she was able to deliver one and keep the second one in for an incredible 7 weeks longer! 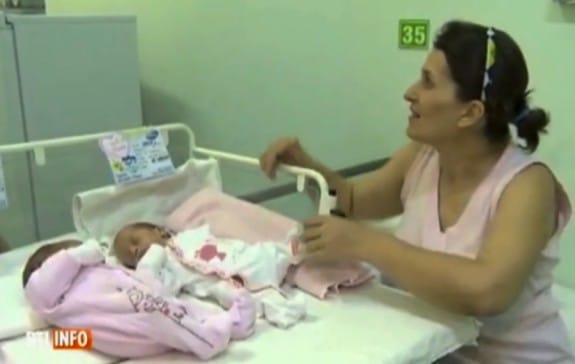 Doctors in Romania were left shocked when one mom went into labour at 28 weeks, but the contractions stopped after her first child was born.

Amazingly she was able to keep the second baby inside for 7 more weeks before doctors delivered her via c-section in early January 2015, at the Cantancuzino hospital in Bucharest. “It is extremely rare; I don’t even know which medical mechanism stopped contractions for the second twin. It was nothing short of God’s miracle,” Doctor Adrian Sorin Craciun told Mediafax newswire.

He said the fact that the twins were in different embryo sacs, and had separate placentas, made it possible for them to be born separately.

Both babies were underweight at birth: the first weighed just 900 grams. Almost two months later, the twin sister weighed only 1 kilogram at birth. The two babies stayed in the hospital until the end of January, when the firstborn weighed 2.2 kilos, and the second, 2.9 kilos.

This is not the first time a set of twins has been born so far apart.  In 2013 Amy and Katie Jones-Elliot arrived 87 days apart, setting a record in Ireland.