Call it cognitive development or just simply a game of “will it fit,” one thing’s for certain: toddlers have a mysterious obsession with putting items in places they don’t belong. Isaak Lasson was one of those toddlers.

For three years, Isaak’s parents tried to find the source of his congestion and snoring, to no avail.

“It broke my heart,” said Isaak’s dad, Craig Lasson, when describing how his son had to sleep with his mouth wide open. “Doctors kept telling us it was allergies or a sinus infection, but nothing seemed to help.”

When his nose started to stink, Isaak’s parents decided it was time for a new doctor.

“We noticed a weird smell when he breathed,” Craig said. “We took him to a new doctor, and he said, ‘I think there’s something in there.’” 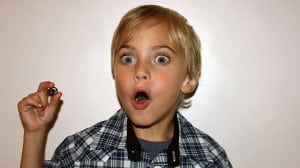 Isaak did admit to putting some spaghetti in his nose, and confessed that it hadn’t come out. So, Dr. Jeremy Meier, an ear, nose and throat specialist, decided to take a closer look. Using long forceps up the six-year-old boy’s nose, Dr. Meier probed around until he hit gold, so to speak.

“It sort of stretched, then all if a sudden it popped out,” Meier of Utah Health Care in Salt Lake City, Utah said, describing the fungus-coated, squishy, rubber wheel that came out of Isaak’s nose.

“We have no idea what it is or where it came from,” Craig said, adding that it could have been anything from a Lego piece to part of a bud headphone. “We were trying to figure out how something that big even got inside of a tiny 3-year-old’s nostril.  It’s pretty flexible, so we think he bent it in half and pushed it up his nose.”

At first, Craig says that he and Isaak’s mother felt guilty about not finding the item earlier, but says that other parents have been supportive and understanding.

“It sounds like a lot of parents have similar stories,” he said.

Meier confers, saying that he regularly pulls items from the ears and noses of children, everything from popcorn kernels to peanuts to raisins.

“Often they won’t remember putting them in there, or they won’t admit it,” Meier said.

As for the wheel, it has been returned to its rightful owner; it currently sits in a jar on top of the family’s fridge.

“Isaak thinks it’s great,” Craig said. “He wants to show all his friends.”

And thankfully, the removed item has helped Isaak breathe and sleep better. Craig also says that Isaak has more energy, and an improved appetite, now the he can actually smell his mother’s cooking.