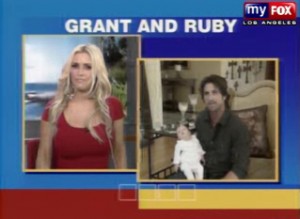 She gave birth to her first baby, Ruby Raven Reynolds at the beginning of July and headed back to work yesterday probably to coincide with the beginning of the NFL season and new school year.

As a surprise to the new mommy, her co-workers sent a camera crew to her house so that she could see how hubby Grant and Ruby were doing. 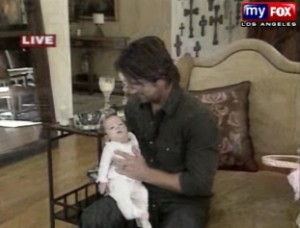 The newborn is very laid back. She sat sedated in her dad’s arms the whole time, not even cracking a smile for the camera. They tried to get her to smile, but gave up enventually after many tries.

Jillian has a nick name for her already, calling her ‘cookie puss’, when she appeared on the screen.

The new mom is still breastfeeding, commenting that there was a bottle of freshly pumped milk in the fridge and telling the baby not to say hi because it would start her milk flowing. 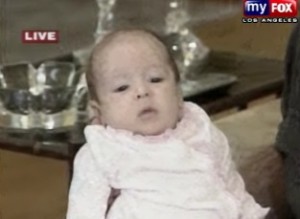 Yesterday before Jillian hosted the beginning of the NFL season, Ruby was a little thrown off by seeing her all glammed. She has spent the last 3 months with no hair extensions in and no makeup on and that’s what her daughter has come to know as her mom. The newborn was a hit with the other newscasters so I would be willing to bet this will not be her last time on the show.