The biggest baby that I have reported on up to this point was just under 15lbs.

A Siberian woman who gave birth to her 12th child — doing more than her fair share to stem Russia’s population decline — was stunned to find that little Nadia weighed in at a massive 7.75 kg (17.1 lb). 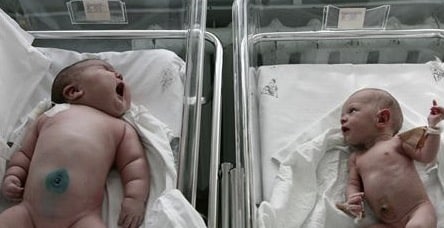 Nadia was delivered by caesarean section in the local maternity hospital in the Altai region on September 17, joining eight sisters and three brothers, a local reporter said.

“We were all simply in shock,” said Nadia’s mother, Tatyana Barabanova, 43. “What did the father say? He couldn’t say a thing — he just stood there blinking.”

“I ate everything, we don’t have the money for special foods so I just ate potatoes, noodles and tomatoes,” she told the reporter, adding that all her previous babies had weighed more than 5 kg.

The funny part is the small baby looking at Nadia in the picture. She looks intimidated.

Her cry is probably much louder than the other babies as well.