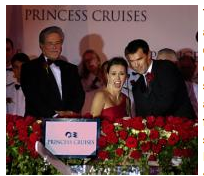 The “ruby red” themed ceremony celebrating romance was hosted by ‘America’s reigning reality couple’, as Trista and Ryan Sutter of The Bachelorette did the honors of breaking the traditional bottle of champagne to mark the ship’s launch.

What a great gig! I wonder if their Godparent role comes with some cruising perks?

The couple recently announced that they were expecting baby#2 due this spring!