Home » Sacramento Couple Has More To Be Thankful For This Holiday Season! 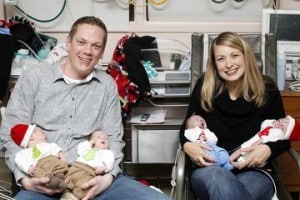 For a Sacramento family, this Christmas will be vastly different from last.  Ryan and Danielle Holaday are the proud new parents of quadruplets, born in October.  After a long road, three of the four boys will be home for Christmas and hopefully the fourth brother will join them at home soon.

“I was unpacking the Christmas decorations and thinking how sad it was last year, wanting to announce I was pregnant but not being able to,” Danielle said.

“It was so hard last year, and this year I’m filled with joy.  I’m ecstatic we have a family.  Our boys we’ve longed for are here.”

The Holadays, both 29, spent years trying to conceive before turning to in vitro fertilization last spring.  Danielle was implanted with two fertilized eggs, but with the chance of success gauged at just over 50 per cent, the couple wasn’t ready to celebrate.

But, they soon learned that one embryo was developing just fine.  Then they learned that the other embryo had split and had become triplets.  So, one of the babies is fraternal and the other three are identical.  Identical triplets plus one, is such an uncommon scenario, there have only been 100 documented cases in the United States.

“My wife calls me from the doctor’s office bawling.  I just froze.  We were trying for one and got four.  We were blessed,” said Ryan, recalling the moment he learned the news.

It was a difficult pregnancy, filled with hospitalizations and bed rest.  In the end, the babies were born on October 6, at 26 weeks gestation.

At birth, the tiny boys weighed in between 1.15 and 2.2 pounds each.  They all exceed 4 pounds now.  They have battled through infections, breathing issues and a variety of other problems that go along with being born so early.

The family has started to make the transition to life at home.  Dylan, was the first baby to come home.  His brothers, Jordan and Kaydan should follow shortly.  First born, Evan, will be the last to leave the hospital.  He is struggling with an infection and is connected to an intravenous, administering antibiotics.

At home, the stockings are hung, the cribs are assembled and a battery of friends and family has signed on to help.  A sign on the front door of the family home reads “Holaday Inn” and lists the hygiene directions for visitors.  The babies are still small and frail, so people handling them will have to take special care.

“The babies are doing wonderfully,” said Jeanelle Willbee, one of the nurses working with the boys.  “They were very, very early so they’re doing extremely well.  Some of that is genetics and some is luck.”

There was a round of applause, from hospital staff, as the Holadays left to take Dylan home for the first time.  The medical staff who have worked with the boys over the past few month, all have high hopes for them.

“This has been an incredible year,” Ryan said.

We wish the best of luck to the Holadays for a happy healthy 2011. – Jen R, Staff Writer