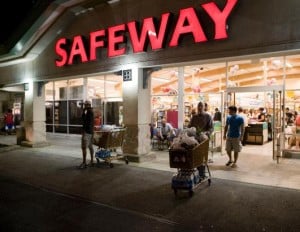 Shopping for a family can be extremely taxing and very frustrating at times. The longer our grocery list, the more tired the kids are, the harder it becomes. Toddlers pick up things while you are paying for your groceries. Kids want their drinks right away, and because you have been shopping for a while, you don’t see a point in waiting. Just save the wrapper or container for when you leave, right?

Issues like this are just the kind of thing that landed pregnant mom and former Air Force staff sargeant Nicole Leszczynski and her husband in jail five days ago. The couple had just moved into an apartment near downtown Honolulu from California. They were still working on getting settled in and had headed out that day to purchase some groceries for their new home. The couple took the bus with their two-year-old daughter and got lost, ending up at a Safeway supermarket.

Because the trip had taken longer than expected, the family was hungry. So, while shopping, they did what any other parent would do – they grabbed a couple of chicken salad sandwiches, munched and finished their shopping. They saved their wrappers so they could pay for the sandwiches at the checkout, but amidst the checkout confusion, they forgot to pay for them.

On their way out, the couple was stopped by the store’s security guard. “When the security guard questioned us, I was really embarrassed, I was horrified,” said Leszczynski, 28.

The couple and their daughter were then led upstairs. They assumed that they would get a long lecture about shoplifting, be asked to pay for the sandwiches and then set free, but they were in for a horrifying experience.

“I asked to talk to a manager and he said it was against their policy to pay for items that left the store. The security guard said we were being charged with shoplifting,” said Leszczynski.

A woman from the Child Welfare Services came to take Zofia, who turns three in December, into protective custody. Placing a child in protective custody is protocol when both parents are arrested, but the store’s spokesperson, Susan Houghton, says that the management didn’t know that the little girl would be put into custody.

Mom tried to keep her composure until after Zofia left.

“I didn’t want Zofia to be scared because she’s never spent a night away from us. She didn’t have her stuffed animal. She didn’t have her toothbrush,” said Leszczynski. But once her daughter left with the caseworker, “I got completely hysterical. I went to the bathroom and threw up.”

An officer then came to the store, read the couple their rights, handcuffed them and transported them in separate cars to the police headquarters. The couple was then fingerprinted, photographed and released after paying the $50 bail each.

After their release, an officer escorted them back to the store – which they were now banned from for a year – and the couple picked up their groceries and walked home, just a little before midnight.

“We basically stared at each other all night. We woke up at the crack of dawn and called (the state child welfare office),” said Leszczynski. To help them get their daughter back, they contacted a lawyer, who suggested they turn to the media for help.

Finally, after 18 hours of being separated from her parents, the toddler was returned home. The couple faces charges of fourth-degree theft and petty misdemeanor. Their court date is November 28th. The family is considering taking legal action against the Safeway chain.

Houghton says they will look at the police report and the security footage from the store before they decide whether or not they press charges against the couple.

“It was never our intent to separate a mother from her child. That was a very unfortunate consequence to this situation,” said Houghton. “We understand the outrage. We are concerned about how this was handled.”

They had purchased a total of $50 worth of groceries. The sandwiches cost less than $5. I am certain that almost every parent has walked out or almost walked out with something they didn’t mean to at one time or another. I know I have. I have always gone back to pay for it and I can’t imagine any store manager or store chain that wouldn’t accept a situation like this as an honest mistake.