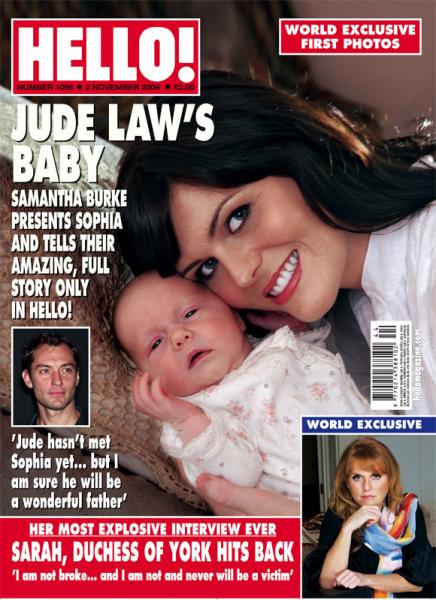 New mom Samantha Burke is introducing adorable five-week-old Sophia – her baby from a brief relationship with actor Jude Law – exclusively in the pages of Hello!.

In a world exclusive interview to accompany the photoshoot, the 25-year-old tells their story, including the high emotion when she gave birth – supported by her mum, her best friend, and three of her close pals.

Sophia, who is the fourth child for Jude Law, was rumored to have been conceived while he the actor was filming Sherlock Holmes in New York.

The new mom admits Jude has not contacted her since Sophia was born, insisting the exclusive photo session she has sold to Hello! magazine will be the actor’s first glimpse of his little girl. But she hopes the star will make arrangements to see Sophia once he has a break from performing on Broadway in Hamlet.

She tells the publication, “There are no plans for it to happen at the moment, but I know he is busy. Once you see her face, how can you deny it?
“She has Jude’s chin and nose, and she does a little pout that I notice he’s done before.”

Burke insists she’s desperate for Law to “be just as good as he is to his three children by Sadie Frost.”

“All she needs is just to know that he’s there for her if she ever needs him. He’ll fall in love with her when he sees her.”

Jude Law has two sons, Rafferty and Rudy, as well as a daughter, Iris, with his ex-wife Frost.