In early October, we brought you news of a same-sex couple from Australia who, through artificial insemination, was expecting quintuplets.  Well the babies are here!  They were born January 3rd, by caesarean section. 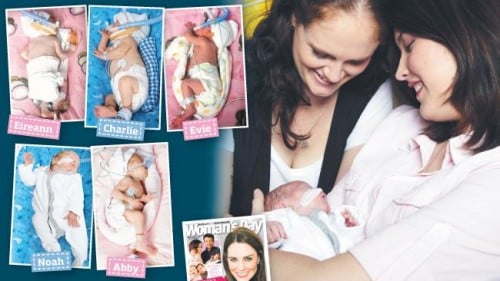 Melissa Keevers and Rosemary Nolan, of Brisbane, welcomed their babies 13 weeks early at only 26 weeks and four days gestation.  The babies, who have been named Noah, Charlie, Eireann, Evie and Abby, arrived weighing between 830 grams and 905 grams.

A complement of 25 staff was on hand for the babies’ birth.  They were taken directly to intensive care.

In an interview with Woman’s Day, Rosemary recalled,

“We couldn’t hold them as they were so small.  We wanted to cuddle them but we knew the biggest thing was to make sure they were all right.”

“We got very teary when they were born.  It was such a journey before they arrived that when we actually met them we realised what it was all for,” Rosemary said.

The couple conceived the quints through the use of donor sperm from a man in the U.S.  He has waved his rights to see the babies.  Amazingly, the babies were conceived without the use of fertility hormone therapies.  To conceive quintuplets naturally is a 1 in 60 million shot.

The babies are progressing by leaps and bounds and are blowing doctors expectations out of the water.  Charlie and Abby and gaining weight like champs.  First born, Noah is able to be breastfed and no longer needs an incubator.  Eireann and Evie are no longer reliant on oxygen and have been moved to special care.

Eireann was scheduled to have an operation to deal with a murmur that was discovered in her heart.  Doctors have decided, however, that it has regulated itself and believe she will be fine without surgery.

The quints join their moms and their big sister Lilly to make a family of eight.  The couple have started a website, twoladiessixbabies.com.au in the hope that members of the public will extend some support for the family. – Jen R, Staff Writer