Sarah Jessica Parker was spotted early this morning enjoying a stroll in NYC with her twin daughter Tabitha, 9 months. 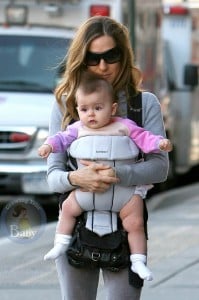 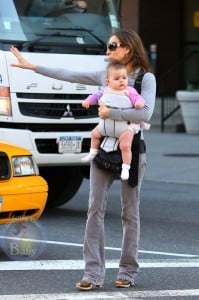 While propped in a Baby Bjorn Original Spirit Baby Carrier, Sarah showed her little one some of the neighborhood shops and even stopped traffic- literally!

Just before the babies arrived last year Sarah opened up about why she and husband Matthew Broderick decided to go the surrogate route saying,

“Well, you know, we’ve been trying to expand our family for a number of years and we actually have explored a variety of ways of doing so,” she said. “This was one of the things we discussed with seriousness that had real possibilities for us.”

After it was revealed that she was in fact having a child via surrogate, Sarah said her glee doubled when they learned she was having twins.

“I mean, giggles!” she said of her reaction when first learning the news. “We didn’t expect it. I think after a certain amount of time, you tend to hold your hopes at bay a bit so as not to be disappointed. One really would have been thrilling and we would’ve felt incredibly lucky. And two was a comedy.”