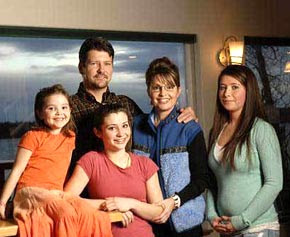 “We have been blessed with five wonderful children who we love with all our heart and mean everything to us,” the Palin’s said in a statement to Reuters.

“Our beautiful daughter Bristol came to us with news that as parents we knew would make her grow up faster than we had ever planned. As Bristol faces the responsibilities of adulthood, she knows she has our unconditional love and support,” the Palins said.

The Palins are asking the news media to respect the young couple’s privacy.

“Bristol and the young man she will marry are going to realize very quickly the difficulties of raising a child, which is why they will have the love and support of our entire family. We ask the media, respect our daughter and Levi’s privacy as has always been the tradition of children of candidates,” the statement concluded.

While a pregnancy at 17 is not ideal, It is nice to see that Sarah has spoken out publicly about her support for her daughter.

If more parents supported their teenage daughters, we wouldn’t have so many abandoned babies.