Daddy Date! Liev Schrieber was photographed pushing his sons Sasha and Sammy through Soho for a boys day out on Wednesday. 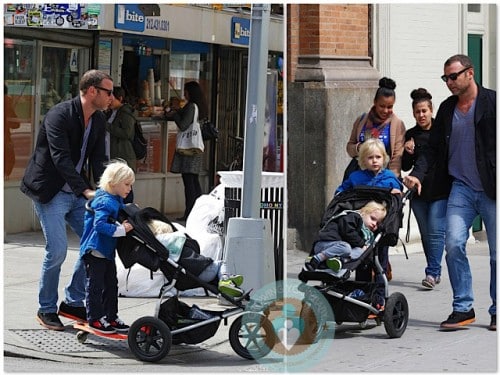 Four-year-old Alexander ‘Sasha’ opted to ride off the back of the stroller on a Freerider scooter, while Sammy cuddled with his blankie in the main seat.

Liev and his wife Naomi have been traveling quite a bit for work, with each actor working on different films.  The most recent project for both, however, is the same movie only called ‘Untitled Farrelly/Wessler Project‘, which is the first time they will be in the same film since The Painted Veil in 2006.

Even though they are both really busy Naomi recently told the Mirror she and Liev plan everything around their children.

“No matter what, mothers will always punish themselves if they work,” she said. “Liev and I try to take turns (to make films) and it’s worked so far.”We’ve probably only overlapped by a couple of weeks once or twice which is very fortunate because our family is the most important thing,” she said.