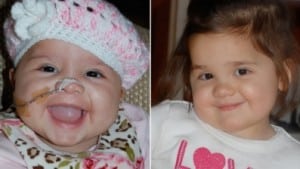 The Pages were in two minds when they initially heard about saving their newborn’s cord blood. But when they finally decided to bank it, even they did not know that it would help them save their baby girl’s life.

When Jamie Page was pregnant with her daughter Harlow, she and her husband Ben discussed and decided to bank the newborns cord blood cells as they did not want to regret it later.

“Medical advances change so quickly. Who knows when this child is 10, 20 years old if she’ll need it,” Jamie said. “It’s a great medical backup to have.”

The decision became a well thought out foresight when just after two weeks from her birth on March 19, 2008, Harlow began having problems.

The infant kept on crying and seemed to be uncomfortable all the time. When the Pages consulted doctors, they first thought it was colic pain.

“We were told it was probably just colic, to try different formulas, different ways of putting her to bed,” Jamie said. “At first I thought they were right. We must have tried six or seven different types of formula and we put gas drops in it, but she was pulling at her stomach . . . I just couldn’t put my finger on what it was.”

At three months Harlow’s stomach became distended and she stopped having wet diapers. The Pages rushed to the hospital only to find out that their baby had a grapefruit sized tumor that was blocking her kidney. The doctors immediately inserted a catheter and did a biopsy to send samples to pathologists. But the situation turned grimmer for the parents when four different pathologists gave four different diagnosis for their baby girl.

“We were in the hospital for five or six days, letting her kidneys recover, and it was the craziest thing,” Jamie Page said. “In two days, we got four different pathologies – they all had different diagnoses. It resembled different cancers, but nothing they had ever seen before.”

Doctors were doubtful about the way to treat Harlow’s cancer as they had not seen anything like it before. Finally after a Chicago based pediatric oncologist said it resembled a brain cancer, chemotherapy was thought to be the best option.

For Jamie and Brian it was difficult news to deal with.

“We were so scared,” Page said. “My dad went through chemo for lung cancer and it made him much more sick than helping him, we didn’t want to torture her. We just wanted her to be comfortable. At the time, doctors said she only had a few weeks to a few months to live.”

But ultimately it was their baby daughter’s smiling face that made them fight for her life. ‘How can we not give this little girl a chance to fight?’

The parents then discussed the option of stem cell transplant for Harlow. The doctors were surprised because until then very few parents had their own stem cell saved from the cord blood and it was very difficult to find a match.

Baby Harlow went through three rounds of chemotherapy. Doctors then hoped that the tumor would have reduced and could be removed surgically. But when they opened the baby’s abdomen, the tumor was totally gone.

“We went in thinking she might’ve needed a hysterectomy,” Page said. “All she had left was scar tissue. They called in more surgeons to make sure they were looking in the right place. We were thrilled.”

The next course of action was stem cell transplant as the experts felt that the tumor was very aggressive and it could grow back. A transplant would ensure that she had healthy tumor free cells in her body.

Harlow was again subjected to intense chemotherapy to destroy her current cells and replace them with stem cells. She was then nine months old. After five days of chemo and one day rest, her infusion began.

The baby then spent 25 days in isolation to avoid any germs, went home for two weeks and then came back again for the second transplant round.

As her stem cells were insufficient doctors had already preserved her blood cells for the second round.

“As grueling as it was, she was getting her own stem cells,” Jamie said. “She didn’t need to be on anti-rejection pills like other kids. Some families had to worry about host vs. graft disease. We had enough concerns without worrying about her fighting her own body.”

The advantage of having her own cord blood cells was immense for Harlow. It ensured that the body did not reject them and also that they were absolutely young and not exposed to any environment factors or chemicals.

According to Alexis Baby, a pediatric nurse practitioner and part of the team cord blood cells are different from average cells as they begin the healing process of the injured part of the body as soon as they are infused. She urges parents to bank the cord blood or donate it. It is also a painless procedure as the cells are procured from the umbilical cord of the baby.

“Otherwise, it’s medical waste, and it’s just thrown away,” Baby said. “There is an option to donate it, but a lot of people don’t know about that, so it’s really unfortunate.”

For Harlow it was after a complete year that she was finally released from hospital tumor free and ready to go home in February 2009. She had to relearn how to swallow and eat again as the chemo and medications had made her nauseous and unable to swallow solid food. But the brave heart stopped taking medications by June that year and was allowed to begin daycare by September.

Says Baby, “As of right now, there is a good prognosis. As each year passes, there is a big step toward relapse-free survival.”

Now, Harlow is just like any other 3 year old today. She loves her gymnastics, dancing, singing and watching the ‘101 Dalmatians’. For her parents, that decision to save the cord blood would always remain the best thing they did in their life.

“I want to encourage other parents to save their child’s cord blood,” Page said. “I tell all our families and friends it’s the cheapest life insurance you’ll ever buy, and it’s an amazing opportunity for your child. To look at her, you’d never know, which is the best part of all.”