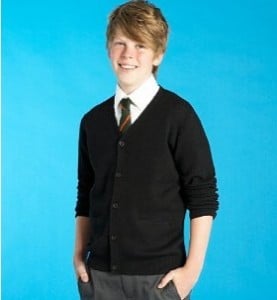 Marks and Spencer, one of the best known school uniform makers is the UK, has recently launched a plus size line to accommodate the growing number of children considered obese. The new uniforms are marketed to children as young as 3 years-old.

Tam Fry, of the National Obesity Forum, said: “This is the actual commercial recognition of what we have known for some time – that obesity in pre-schoolers is building up. Now 27% of entrants to primary schools are overweight or obese.”

The new uniform line offers preschoolers with 23 inch waist skirts and pants, a size normally worn by 8 year-olds. Marks and Spencer says they are answering a demand from parents for larger clothing. A spokesperson for the company says the new, larger sizes are just a trial. They have not yet decided whether to make the plus size line a permanent addition. However, they acknowledge that children come in all shapes and sizes, and their clothing should reflect that.

To Mr. Fry, however, instead of accommodating parents of obese children, more effort should be done to curb the problems. He says the problems is shared by parents, the government, and the food industry.

“But at a government level, they have consistently ducked out of regulating the food industry.

According to the NHS Information Centre, one is five children enter preschool already obese. By the end of primary school that number raises to one in three. Over all, boys are slightly more likely to be obese than girls of the same age. – Summer, staff writer