It has long been a concern of parents everywhere, the lunches that our children’s schools are feeding them. Are they healthy enough? Are our kids getting the proper nutrition that they need? We can worry a little less now, though. Starting next school year, grain products, such as pasta, biscuits, tortillas, bread, pizza crust and more, will have to be either whole-grain rich, or more than half whole-grain. The brainchild of first lady Michelle Obama, the new requirement has been set in place by the government in an effort to make the meals served at school healthier and more nutritious. 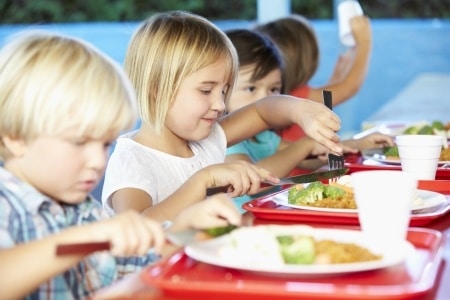 These changes have been being phased in over the last two school years, with more changes expected to occur later on this year. However, some schools are less than enthusiastic about these changes being expensive and difficult to implement. Many schools are asking the Agriculture Department and Congress to scale back some of their requirements, with their main concerns being finding enough whole-grain rich food that children like to eat, lowering the sodium levels in food, and avoiding vegetables and fruit from ending up in the trash bin.

Across the country, when interviewed, many school nutrition directors admit that there should be more healthy changes made to school lunches, who have long been known for serving grease-laden pizza and oil-drenched fries. Thus far, children have adapted very well to the changes that have been made to school lunches, and they are receiving more variety in the school lunch line and eating healthier overall. More than 90% of schools are meeting the requirements, according to the USDA.

However, some school nutrition directors like Becky Domokos-Bays of Alexandria City Public Schools in Virginia are saying that they would like to see some revisions to the requirements. Domokos-Bays says that she has tried to serve her students whole-grain pasta a total of twenty times. Each time, they rejected it. Nutrition directors say that these new standards were implemented too fast, as it takes children time to get used to new tastes, and school lunch vendors to revise their menus and reformulate their food. When children do not purchase lunch, or they throw it away, it can cost the school money. Domokos-Bays says “The regulations are so prescriptive, so it’s difficult to manage not only the nutrition side of your business, but the business side of your business.”

The School Nutrition Association has asked USDA and Congress to lower the requirement of whole-grain rich foods to 50%, as well as asking them to lower the sodium requirements, which are set to take effect in 2017, and to suspend the requirement for students to take a fruit or vegetable. But Margo Wootan, a nutrition lobbyist for the Center for Science in the Public Interest, who has pushed for healthier meals in the past says “You can’t call a meal a meal without a fruit or vegetable.”

Janey Thornton, of USDA, who is a former school nutrition director believes that the problems that schools currently face will likely lessen in years to come as the food industry creates healthier food options. Thornton says “I’ll bet that five or seven years down the road, we’ll see kids eating healthy food and we’ll see acceptance.” However, republicans who fear “government overreach” may try to intervene before we see that acceptance. Alabama Representative Robert Aderholt, who is in charge of the House spending committee that oversees the USDA believes that school districts may need “a pause” while these problems are being sorted through.

Some of the proposed changes to school lunches include:

At Alexandria’s Patrick Henry Elementary school, students are positive about the lunch transformations, with many saying that they “loved” their lunches, munching on plump strawberries and other fruit. Kindergartner Jade Kennedy gushed that she recently got to try kiwi for the first time. However, Domokos-Bays stands firm in her decision to continue to serve white pasta to her students until she is required to make the change this summer.