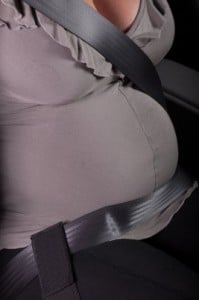 Providing pregnant women with a valuable pregnancy gift, a team of researchers has developed a car seat belt that protects the mother as well as the unborn baby if an accident should happen. The conventional seat belt, researchers say, is not designed to safeguard the child.

The research and the development of the SeatBeltPlus were conducted by scientists at the Loughborough University in England. It took them ten years to study and come up with a belt design that suited an expectant mom’s needs.

The belt design won an Enterprise award at the University and is now waiting for funding for mass production.

According to Prof Serpil Acar, of the university’s Design School, the need for the seat belt was felt by her when she was herself pregnant.

“I could see that there was a design for women problem that needed a solution,” she said. “That was many years ago.”

The team found that 11 percent of pregnant women did not wear the seat belt correctly and even if they did, the position of the belt shifted as they traveled.

“Only a very small number of pregnant women wear a seat belt as it should be worn,” said Mostafa Al Dah, member of the team .”If the belt is worn above the hip bone, during an accident it can seriously damage the placenta.”

In 2008 a University of Michigan study found that 200 fetuses in a year could be saved if women wore the seat belt correctly. The biggest threat the fetus face after a car accident is the impact might detach the placenta from the uterus wall. This can starve the baby of oxygen and it is estimated to be the reason for fetal death in 80 percent of car crashes.

The UK team collaborated with car industry experts and worked with more than 100 expectant mothers to learn everything about their driving experience or being in a car while pregnant.  Forty-nine measurements were collected from each woman, capturing the many changes they undergo during pregnancy. More than 1000 pregnant women worldwide completed a questionnaire, which was made available on the Internet in five different languages.

This comprehensive database led to the development of a computational model called Expecting with a 38-week pregnant car occupant and the impact felt by the developing fetus. The researchers then came up with important guidelines for the car industry to model their cars according to an expectant mother’s needs.

With the SeatBeltPlus, the UK scientists changed the design so that the lower strap of a conventional three-point belt is kept over the hip bone while ensuring the upper strap does not rest over the pregnancy bump.

It took the team two years to come up with the correct design. It was then put through extensive simulation and testing.

Professor Acar said: “Our research has gone from a concept to a reality; from investigating the issues pregnant women face in cars to generating models, conducting simulations and designing seat belts. After years of intensive research we can now develop a product that can have an impact on safety and comfort for pregnant occupants, drivers and passengers.”

“The university is trying to raise money to move into mass production and marketing of the product,” said Prof Acar. “Therefore it is hard to guess when it will be on sale as it all depends on the financial investment.”

Moms cannot quit driving or sit in a car during pregnancy. The newly designed seatbelt is, therefore, an innovation that can not just ensure their safety but the safety of the precious cargo they are carrying.